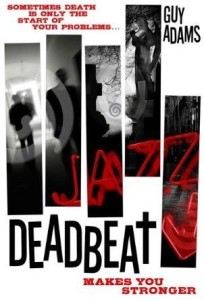 Guy Adams is an English author, actor and comedian who has written several tie-in fiction and non-fiction books for shows such as Torchwood and Life on Mars, as well as the acclaimed novel The World House and a pair of genre-bending Sherlock Holmes novels. Deadbeat: Makes You Stronger is the first in a new original series which will be continued with Deadbeat: The Dogs of Waugh.

Set against the open underbelly of some of the seedier parts of London town, Deadbeat tells the story of Max and Tom, a couple of ex-actors, joined  through a less than ordinary bond; both with a nose for adventure and fondness for alcohol.

Tom, the owner of the titular jazz nightclub, and Max, one drink away from a life on the streets, are staggering home one night when they spot something peculiar; a clutch of ne’er-do-wells loading a coffin into the back of a van, a coffin that contains a breathing corpse. Naturally, our inebriated heroes have to investigate, and so begins an escapade that spirals out of control faster than either of them could anticipate.

Friendships are forged, wrongs are righted and dark pasts are confronted in this tale of supernatural crime and cocktails.

Deadbeat: Makes You Stronger is a thoroughly entertaining read and part of its charm is the way integral elements are revealed to the reader, such that I feel compelled to skirt around the major revelations in this book for fear of ruining your joy of discovery. Adams has a flair for witty yet (importantly) realistic dialogue, and his principal characters, Max and Tom, are immediately likeable, intriguing and complex enough to compel the reader to delve deeper.

Adams’ previous forays into the world of Sherlock Holmes (both through playing the main part and writing two previous novels) are strongly evident in this story, with Tom and Max playing the more dubious versions of Holmes and Watson, right down to the closeness of their friendship, questionable investigative techniques and flirtations with substance abuse. The rest of Tom’s motley crew, comprised of his club’s barman and bouncers, a doctor friend and Charles Babbage, inventor of the modern computer, make up Adams’ own version of the Baker Street irregulars, and much of the book’s humor comes from their interactions with each other.

From a technical standpoint, Adams masterfully plays with the first person perspective, offering multiple points of view throughout the book and, before you know it, the story reads like an improvised jazz piece with everybody pitching in over a dizzying rhythm which offers multiple layers to a linear tale and makes for a real page-turner.

With this introductory novel, Guy Adams has established a well rounded group of characters within a supernaturally noirish setting that I have instantly fallen for, and I await their next adventure with relish.