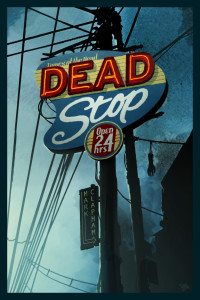 In 2012, we put out an open call for submissions from Abaddon Books and this month sees the release of the first e-novella from one of the authors who answered our call!

The new digital exclusive from Abaddon Books is Dead Stop – a chilling new Tomes of the Dead novella from Doctor Who and Warhammer 40,000 writer Mark Clapham.

David Larkin can see ghosts. It’s a blessing – or a curse – that’s been part of his life since his eleventh birthday. It’s not much use to him, and he mostly just tries to ignore them and get on with life, travelling around and keeping to out of the way places where not too many people have died.

Until the ghost of Melissa appears to him, in a forgettable truck-stop diner on a highway in the American Midwest, warning him about the flood of zombies heading his way. Melissa offers him a deal: she’ll help David escape the zombie horde – in exchange for finding her zombified body and destroying it…

Dead Stop is available through the Rebellion online store as well as on Amazon, Nook, Kobo, and all good online retailers.