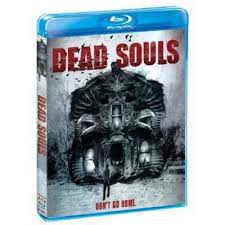 Well it had to happen sometime. OK, make that two things had to happen sometime. The first being that the amazing Scream Factory would jump from their usual playbook and not release a classic (forgotten or otherwise) fright flick from yesteryear and instead bring out something brand new to Blu-ray under their name. The second is that they would release a dud. What a surprise that both of those boo-boos happen to be the same movie, this movie, Dead Souls.

The warning signs were there from the start, as this was made for the cable TV channel, Chiller, which is a sister station to the SyFy channel. And if that doesn’t start warning bells ringing in your head, then it really should, because this movie has all the hallmarks of a SyFy Original. You know, like those cinematic winners: Frankenfish, Komodo vs. Cobra, Dinocroc vs. Supergator and other great animal mash-ups and versus movies. At least this flick was based off of an actual novel, in this case one written by Michael Laimo. Was that pedigree enough to save this movie from becoming a laughingstock like Sharktopus or being consigned to the Blu-ray bargain bin in record time?

The story here begins well enough, with a crazy preacher killing and crucifying his entire family and then himself. The psycho servant of god only missed his baby son because he couldn’t find him. Jump ahead 18 years and that baby is now old enough to inherit the family home, barn, and lands. So he goes there and finds two surprises, first that the phone and power is still on even after all these years. Nah, that’s not surprising, that’s miraculous. The other thing he finds is a cute young homeless girl there to fill the mandatory love interest part of the story. He also finds lots of ghosts from his dead family, but that wasn’t really a surprise, now was it? I mean it’s sort of right there in the title of the movie.

There are a lot of things that miss the mark with Dead Souls, and a rather generic ghost story is just the beginning. First and foremost, the whole movie just looks cheap. Like really cheap. Like SyFy Original cheap (big surprise, I know). That cheapness is made painfully apparent whenever the need for special effects arise, and in a movie all about ghosts, that is rather frequent. Both Chiller and Syfy need to either start making movies that don’t rely on special effects, or up their special effect budget, because instead of provoking frights, chills, suspense, or wonder, the sill CGI shenanigans they pull off here only cause giggles. That could be fine for a campy flick like Rage of the Yeti, but for a serious horror movie it’s the kiss of death. The other flaws with Dead Souls are more of a basic filmmaking persuasion. Just plain old bad acting, boring direction, hackneyed writing, and slow pacing. All this means that there’s not much of anything to put in the good column with the dreary and dreadfully dull Dead Souls.

What about the extras? Even if the movie is blah, Scream Factory usually brings the goods when it comes to the goodies and this release is no exception. First there are seven minutes of extra footage in this release that wasn’t in the movie when it aired on the Chiller channel. Since I didn’t see it when it was on TV, I can’t tell you what the  difference was between this version and that one. There is an audio commentary with director Colin Theys, screenwriter John Doolan, and producer Andrew Gernhard.  While I thought this movie was only OK at best, this commentary was actually pretty enjoyable and funny. There are also a collection of bloopers, and a very short (6 minutes or so) set visit featurette, and a bunch of TV spots.

So just in case I’ve been too subtle, let me spell it out for you here: Dead Souls in not a very good movie. Sure it’s not horrible, but I do have to give it a pass instead of a recommendation, the first time I’ve ever done that for a Scream Factory release. Here’s hoping I don’t have to do that again for a long, long time.