‘Dead of Winter’ – Board Game Review 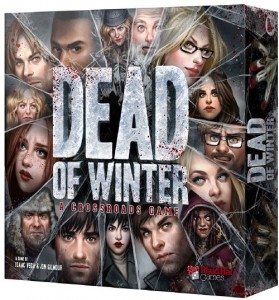 Dead of Winter is a semi-cooperative game where players control survivors in a winter-setting zombie apocalypse.  I say semi-cooperative because there is a possibility for a traitor to be present among the players, an element than can make for some really interesting possibilities.  During the course of the game, players will be faced with various challenges each round such as food, waste, a crisis, and, of course, zombies as they try to complete a group objective.  Additionally, each player will also be trying to accomplish a personal objective.  At the end of the game, players can win individually, as a team, or not at all.

In Dead of Winter, each player starts the game with control of two survivors (from four which they are dealt), some randomly assigned starting equipment and some six-sided action dice.  Each survivor is rated for leadership, combat, and searching as well as possessing a special ability.  The doctor, for example, can heal a wound once per turn.  Nothing overly complicated here.

The zombies are out there trying to get at the survivors and are a constant threat that must be dealt with, but they are endless and despite the theme, are not the over-arching focus of gameplay.  You need to kill them, but it isn’t an overly-elaborate process – use the proper value of action die on a survivor and boom, dead zombie.  Very much like in The Walking Dead, they are there, they are dangerous, but the real entertainment is in the player/survivor interaction.

Each round, players are under pressure to deal with a crisis.  Each item card has a symbol or two on it and each crisis card will require that the players contribute a certain (usually number of players) number of a particular symbol, be it medicine, food, tools, etc, in order to resolve the crisis.  If they fail to do so, there is a consequence.  Also, if someone contributes a card with a different symbol than the one required, it cancels out one of the symbols contributed.  That’s where the traitor element comes in.  That deck is shuffled before resolving, so if someone is trying to sabotage, you won’t know who based on the order.  In my eyes, there is a little flaw with this system and I will touch on it later.

Additionally, there are crossroads cards, a core element of this game and, as the publisher states, future, games in this series.  Before a player takes their actions, the player to their right takes a crossroads card.  These cards have different pre-requisites on them – certain characters being in play, survivors performing certain activities, and even some other twists, which I won’t spoil!  If these are met, it triggers an event, which puts the player(s) at a crossroads.  It either requires the player to make a consequential decision or puts something to a simultaneous vote.  I totally love the mechanic, and it adds a nice little touch to every round.

There are six locations around the board where the survivors can travel to in order to acquire more items, survivors, etc, but be careful since travel (and combat) have risk in the form of the exposure die.  The exposure die is a d12 that you roll when you move or attack.  Roll a tooth (1 in 12) and your survivor is dead.  Period.  It reminds of the old-school AD&D game with the Save vs. Death mechanic.  Oh, you failed?  You’re dead.  Even worse is that the infection spreads to the survivor with the lowest leadership.  That survivor’s player then chooses – do I kill them off and end the infection or roll the exposure die.  Roll a non-blank side and they die too…and the infection spreads.  Also, when searching, you can choose to make noise to draw another card, still only keeping one.  Why wouldn’t you always do it?  Every noise token increases the chance of additional zombies, that’s why.  It’s a pretty neat element and I know that there will be the usual anti-dice/random results pushback, but it’s fun and risky and that’s what the gaming hobby is all about.  For me, it’s another big plus.

Some of the components in Dead of Winter.

Lastly are the player actions.  You get one action die per survivor + one so more survivors equals more dice.  One thing I like is that even if you roll poorly, you can always do something with your dice, whether it’s to make a barricade or clean waste.  You can even use food to boost your die for that desperately needed +1.

By the end of the allotted number of rounds, the main objective is completed, you check to see who has completed their personal secret objective.  Do both and you win.  If the group fails its main objective, then no one wins.  Run out of rounds and sorry, you all lose.  It’s just that simple.

The main board is ok and I found the entrance area a little cluttery and the location cards are kind of flimsy for my liking.  The locations do have a nice graphic in the top corner that gives you a hint as to the frequency of what you are likely to find there.  The tokens are nice and I’m a big fan of the stand-ups rather than plastic minis in this case.  I played a copy that had frosted dice which do not come with the game, but were a nice bit of pimping.  The cards are nice as is the big red exposure die.  Overall, I like the game art, though the font size on the crossroads cards may prove challenging to those of us with eyesight that just isn’t what it used to be.  I like that there are a LOT of crossroads cards – 80 in all.  That is a really nice touch that will keep some variety in the game for a good long while.  All in all some good components here and I don’t think you will feel ripped off based on what you are getting.

RULES
I found the rulebook to be colorful and easy-to-read with lots of detailed examples.  This is something that I always appreciate that.  I think this rulebook is a step up from some of Plaid Hat’s previous rulebooks, such as Mice & Mystics, which I found to not be the clearest sometimes.

Game flow is smooth and fast and downtime is really not an issue.  I suppose if someone has a dozen survivors, this could slow the game down a touch, but otherwise it’s pretty quick.  Two turns into my first game, I had the flow of my turn down pretty well.  It has a little bit of fiddliness as far as trying to locate a particular survivor standup and adding zombies, but any complaints about that are really just trying to look for something to put down.

As far as player counts go, I can’t see playing this with two players.  Three is good, but four and (maybe) five is the sweet spot.  More players also increases the possibility of the traitor mechanic coming in to play, which can only make this game better.  It also makes it more likely that someone could get exiled from the colony!  You don’t want a traitor in your midst, so a vote can be called to have someone expelled.  Good stuff.

Rules exceptions are not something that I can see being an issue as it can be in some games.  My play of this didn’t see a single case of referring to the rules for any reason.  This gives light to the simple, but not simplistic, rules implementation.

So what do I think?  I like it.  It’s different than the host of zombie-themed games that seem to pour into the hobby by the dozens.  The crisis cards put a little pressure on the players to give up some of their hard-searched-for stuff.  One little knock that I have on it would be that I think I would like the mechanic even more if it REQUIRED you to contribute a card on your turn.  That way, suspicion about the possibility of traitor, would be rife!  “Who put a tools icon in?”  “I had no choice!”  I’ve seen this kind of element work really well in Battlestar Galactica Express and I’m curious as to why the designers didn’t include it here.  No matter.  Again, it’s a minor little quibble.

The crossroads cards are the core piece of the game and make the game really fun and add that right amount of tension.  Trying to take your turn while another player is reading the potential bad things that could happen if you do X is a pretty unnerving feeling and all within the theme of the game.  I’m certainly curious to see how Plaid Hat implements this in the future.

I also really like that you don’t have to have 10 survivors to be successful.  In my play, I lost one of my two survivors in the second turn and never got another one.  I played it out with just that single survivor and still accomplished my secret goal.  Fortunately, the rest of the players were able to tackle the group objective with me supplementing, but who cares if you win!

Dead of Winter plays fast and keeps moving along and experienced gamers should get this done in about 90 minutes.

This is one of the few new games that caught my attention this year.  I was curious to see how the crossroads mechanic worked as well as how the crisis cards got dealt with.  Overall, I like it very much.  The strain on resources that the crisis can cause, especially when one player takes a turn where they contribute nothing is significant.

The theme of the game, from frostbite that causes recurring damage to the exposure die all contribute seamlessly.  Nothing feels forced.  Some of the tropes on the crossroads cards are a little cliché, but hey, you’re playing a zombie game!  There are going to be clichés.  For me, they are comforting and welcoming.

I hope that Plaid Hat follows a similar path with Dead of Winter as Fantasy Flight has done so far with Eldritch Horror – expansions that add more of the same rather than lots of new game mechanics.  When something is good, you don’t change what it is at its core, you put some frosting or sprinkles on it, or in this case, some brains and gristle.  That’ll be enough to make good even better.

This was a blind buy for me as I had a feeling that I was going to really like it.  Fortunately, I was not disappointed and I am doubly glad considering how scarce it is right now.  When it becomes available again, do yourself a favor and grab it.  Otherwise, you may find yourself really wanting something that you can’t get.  That’s a real crossroads.

I’ve recently been named as the Game Reviewer for Hellnotes.com, a site that reviews all things horror. If you’re a horror fan, feel free to check it out.