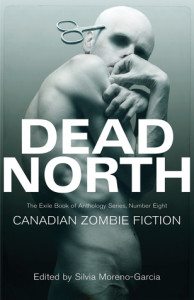 A collection of twenty short stories with a central theme of zombie related fiction in a Canadian setting capitalizes on the widely successful trend of the undead pop culture phenomenon.

It seems only fitting in Hollywood as well as the realm of the page where the horror genre is concerned, if a particular formula is successful then run with it screaming blood curdling murder all along the way.

The resurrection of zombie related fiction into our entertainment culture and its continuing momentum of popularity is worthy of an anthology in its own right. It’s not surprising to see an onslaught of varying sub genres surface in the market. Dead North is certainly no exception. Where we as the audience wouldn’t ordinarily sense the relevance of an anthology crafted exclusively towards Canadian geography, the premise does provide some definite allure and intrigue.

As a forty year old Canadian I was rather excited at the notion of a homegrown anthology of the reanimated. The possibilities are frankly endless and I found my curious nature had gotten the better of me as I ravenously tore through page after page. My initial concern of this collection getting lost among a plethora of other releases was quickly diminished. The tales are as distinctive and diverse as the authors themselves, proving this book could appeal beyond our borders every bit as much as it does in its origins.

The plot lines are creative and innovative subtexts of situations and circumstances. From the gruesome “Kissing Carrion: to often comical “Waiting For Jenny” to the deconstruction of familiar tales such as “Adventures of Dorea Tress”, the content appears to be as rich in diversity as our very culture.

While the stories remained compliant and conformed to Canadian origins guidelines I couldn’t shrug off the feeling that something was missing in terms of global commercial appeal. It would be a tragedy for this anthology to be discarded or passed by an American or European market. Much of the content was inspired by Native folklore which is intriguing and fascinating in its own right. Yet the anthology somehow does not entirely epitomize the Canadian experience especially as seen from an international perspective. The tone tends to indicate a collection of tales that may take itself a little too seriously. Perhaps if the odd entry included an exploitation of some of the stereotypes about our nation it would provide some sense of relation. Imagine a tale of relentless hockey fixation as a good natured ribbing or including landmarks such as the CN Tower, Niagara Falls, Casa Loma or other internationally recognized settings? A mish mash tale of political scandal could’ve breathed a seal of Canadian authenticity approval. Imagine a mish mash contemporary political soiree: Rob Ford-Zombie Slayer? The impact on global market would be off the charts. But as I digress it’s clear the editors at Exile Editions had an entirely different mandate.

The authors that were hand selected such as Gemma Files, Ada Hoffman, Jamie Mason, and Brian Dolton just to name a few composed in eloquent prose. Each narrative captures the audience’s sense of captivating introduction, sound pace of plot and unpredictable climax. Many if not most of the stories are penned from first person point of view which appeals to the emotional aspects of the characters. We’re enabled to feel what they feel suspending our plausibility factors.

An abstract sense of zombie evolution is visited or perhaps more accurately the concept is reinvented as we’re introduced to a new breed of varying assortments of the undead. In these versions many can run, swim, communicate with coherent expression and exist within everyday society. These very notions exemplify the terror aspects of a ‘they walk among us’ type philosophy’.

All in all Dead North is not a bad collection. As a consumer I would likely pursue its offerings but not likely as a first choice.