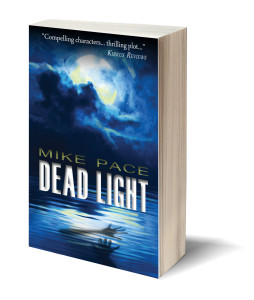 First-time novelist Mike Pace has turned in a high stakes horror thriller about a demonic light that begins terrorizing the inhabitants of a small southern Maryland town.

Cumberton, Maryland, is one of those quiet little college towns where nothing of any importance ever really happens.  Sure, the local college kids might cause a few problems every now and then, but these kids attend Starr College, the flagship college of the Reverend Starr, a world-class televangelist who virtually runs the town.  In DEAD LIGHT, problems begin when an ancient box containing, well, some kind of demonic MacGuffin that manifests as a light and can bring about the end of the world, is accidentally exhumed by some horny college students at the local cemetery (is it ever a good idea to have sex in a cemetery?).  What follows is a rash of suicides among college students, and very public, very messy ones at that.  The local sheriff, Eston Booker, is under a lot of pressure to white-wash the whole affair since it seems to reflect poorly on the college and Reverend Starr himself.

Booker quickly realizes there’s a lot more going on than just a couple of despondent college students.  He’s assisted in his investigation by a tough-as-nails female detective from Baltimore named Tucchi, who is ordered to take a vacation and try (unsuccessfully, as it turns out) to relax.  The pair certainly end up biting off more than they can chew when they’re forced to battle demons and stop what seems to be the imminent end of the world at the hands of Satan.

There are some flashback chapters set on a slave ship as it travels to America, and in an early American colony that provide some of necessary backstory for DEAD LIGHT.  On the one hand, these provided some needed depth and an understanding of what was actually going on in the novel.  On the other, I was skeptical of a satanic cult operating from the 1660s, and the flashbacks themselves were a bit spread out in the narrative, so they sometimes became either jarring or too much of a tease.

Some of the elements of DEAD LIGHT just didn’t work for me, and seemed slightly humorous and out of place.  For example, the demonic light also manifests itself with the scent of burnt cookies or figs, and is accompanied with a sensation like a mosquito bite on the back of the neck.  Seems kind of silly to me.  Also, I thought that the demons that eventually appear also lack a genuine sense of menace.  I’d have liked to see more genuinely scary touches.

DEAD LIGHT was a quick-moving pageturner.  It’s a thrill ride, and a fun one at that.  It’s not a classic of horror fiction, and it’s certainly not going to change the way you view the genre, but it’s a fun book.  Sometimes that’s exactly what you’re looking for, especially if you need to load up your Kindle before you head to the beach.  If you’re looking for a fast-paced thriller that doesn’t require a great deal of concentration, then DEAD LIGHT may be just what you’re looking for.