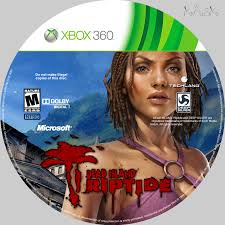 By Deep Silver and Techland

I’ve got more zombie gaming goodness to talk about today. It seems like you can’t throw a severed head these days without hitting a zombie video game. So is this quick sequel/sort-of-expansion to last year’s surprise zombie hack n’ slash hit, Dead Island, any good? Or is it like many fast follow-ups; a quickie cash grab and little more? Well get your baseball bat with the nails in it and your sunblock, its tropical zombie hacking time again.

Dead Island: Riptide picks up right where the previous game ended, but you really don’t need to have played that first one to get what’s going on in this one. The story is pretty generic Zombie 101 stuff. You play as one of five characters once again trapped on a new tropical island in the middle of an unexpected zombie plague. If you played the first game then you can import your character into this one, which is always cool, otherwise you get your choice of two women or three men, each with their own specialty (like bladed weapons, guns, etc.) and each with a thinly fleshed out background. You can also play co-op online with three others (yes, despite having five characters, only four people can play together) and that’s when this game really shines as it’s always better bashing zombies with some buddies.

As for mechanics, Riptide plays in first person, but while there are some guns, it is far from a shooter. Up close, dirty, and desperate melee action is the focus here, and DI:R does that very well. You get a wide range of stuff to smash and slash with, and these can be made even more deadly with a number of mods like fire or poison. So if the idea of smacking a zombie upside the head with an electrified machete, a flaming baseball bat, or poisoned katana sounds like fun, then this is the game for you. But like the infomercials say, that’s not all. In this game you can target specific body parts for a bunch of gruesome effects, like the ever popular beheading, or my favorite: breaking the bones in the zombie’s arms. When this happens the poor zombie’s arms just flop about uselessly while it still tries to bite your face off. Sure it’s gross, but it’s also kind of funny if you’re a sick puppy like me.

Combined with that first person beat-‘em-up game play, there’s a bit of an RPG element to this game. As you wander this open world, you will bump into many quest givers and have the option to complete side quests galore. Each successful quest, and undead baddie killed, gives you experience points that allow you to level up your survivor. With each level you get a skill point to spend in one of three skill trees to help you kill more effectively, or survive the horrors more easily. While not reinventing the wheel, or doing anything even remotely new, the system works pretty well.

Let’s talk about location for a second. If anything, this is where Riptide drops the ball when compared to the original Dead Island. The first game began with a very fun tropical vacation resort setting and then shifted to the jungle, a city, the mandatory sewer part, and so on. Riptide begins with the generic jungle, then goes to a city, the mandatory tunnel (read as: sewer) part, sand so on. Basically all the locations seem very much the same from the first game, but without the one area that was the most fun. Riptide could have taken the game in an all new direction, but sadly it just gives you more of the same. Is that automatically a bad thing? No, not if you really liked the original zombie masher, but it does feel like a big missed opportunity to do something new.

On to the meat of the game, the zombies. They’re pretty darn good here. Not only do they look appropriately gross and rotting, but they also sound the best in any videogame. They gurgle, moan, scream, and more importantly die with a great amount of squishy, wet sounds. In addition to the audio and visual ascetics, this game makes both types of zombie fans happy by having both the classic shambling undead of Night of the Living Dead and the hyperactive infective murder machines of 28 Days Later. Furthermore there are a few special undead, like the exploding suicide bombers, the hard hitting brutes, poisonous zombies, and more. So no matter what kind of zombie you like most, this game has got you covered.

Now to be sure, Dead Island: Riptide is not perfect. It’s got some of the jankiness common to all open world games, but that’s to be expected with such a large game. In this game’s favor are the remarkably few load screens, and when they do occur, they are mercifully short. However, I have heard from a lot of players all about various bugs, crashes, and other technical foibles, and I have encountered a few myself including zombies clipping through walls, characters getting stuck on the environment, random game crashes, and glitched achievements not popping when they should. Did they make the game unplayable? No, but they sure were frustrating when they occurred.

So do I recommend Dead Island: Riptide? Well if you liked the first Dead Island game, then you will like Riptide as it is more of the same. If you never played the first game and just want to have some mindless zombie stomping fun, this game will give you that. If you have buddies online and you can get together with them for some zombie slicing shenanigans, then this game can be quite fun. If you didn’t like the original DI, this one won’t do a thing to change your opinion.