DAY OF THE DEAD – Blu-ray review 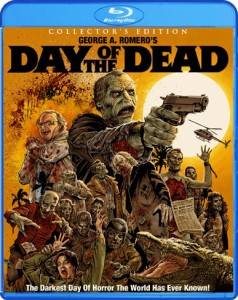 DAY OF THE DEAD – Blu-ray review

Oh hell yeah. Do I really have to review this for you to consider buying it? It’s the last of the original Romero Dead trilogy, and quite frankly, this is where Romero should have stopped making zombie flicks. Day of the Dead, while at the time not as well loved by critics or zombie fans as his Night or Dawn films, was an appropriately apocalyptic ending to the genre redefining series that began back in 1968. Since Day’s release, it has been reevaluated and judged far more favorably by zed-heads all over the world. Does that mean that Romero’s latter Dead flicks; Land of, Diary of, and Survival of will be better appreciated as time goes by? Hell no, they’re just different shades of bad, I’m sorry to say. But this one, Day of the Dead, was perhaps a bit ahead of its time. It needed a few more years for many people to get just how damn good it was. But not me. I’ve been a Day of the Dead fan since I first saw it as a teen on a rented VHS all those years ago. Simply put, it blew me away. It was so dark and at times so nihilistic, that tonally it is the grimmest of the original Dead films. Then there are the amazing gore gags of splatter master Tom Savini. This film is the murderous maestro at the very top of his game. Day of the Dead has everything going for it that a zombie fan could want, and now it’s on a new Blu-ray from the fine folks over as Scream Factory. So again, do I really need to sell you on this? Hmm, I guess Scream Factory could have messed things up with a bad transfer or something, or it might just be a question of is this new edition worth the upgrade. I guess my review does have a purpose after all. Yay. So please, keep on reading, and don’t forget: aim for the head.

Day of the Dead shows the continued decline of the world in the wake of a zombie uprising. For all intents and purposes, there is only one small group of scientists and army guys left in an underground bunker somewhere in Florida. You, the viewer, don’t know how long the undead have been walking around, but you get the idea that it has been a while, as their ever present threat has now almost become commonplace. Boredom and tedium sets in and people are beginning to wonder if there’s any point to fighting the good fight anymore. The world they knew is over, so why not just go somewhere remote and try to enjoy what’s left of their lives? That central argument is inflamed by a growing divide between the scientist and the military who think that they are in charge and that they don’t really need the “egg heads” anymore. So again it turns out that man is the biggest monster once the zombies hit the fan, and while that might seem like a trope now in 2013, (A) this movie came out in 1985 and that was before the clichés were overused and (B) writer/director George A. Romero invented all those tropes, so if anyone should get a pass for using them, it’s that guy.

So the story is kind of basic, but what sets Day of the Dead heads and shoulders above so many other zombie flicks, is that it is at the pinnacle of what makes these kind of movies so damn cool. Taking place largely in a lightless, labyrinthine, mine-turned-bunker, the location is original and the feeling of isolation is superb. The military thugs are wonderfully villainous, especially Joseph Pilato’s take on the scene-chewing, eye-bulging, screaming and swearing Captain Rhodes. He is the designated douchebag of the movie, and he relishes playing that role to the hilt. Then there are the zombies themselves and the mess they make when they start munching on people. Both of those things have never before or since looked as good as they do here. If you are a gorehound then Day of the Dead will have you drooling like Pavlov’s dogs. And then there is Bub. If you know Bub, then you know how awesome he is. If you don’t, then you must not have ever seen this movie before. If that’s the case, then by all means, now is the time to rectify that horrible oversight. But is this new Blu-ray the right edition for you to get?

Heck yeah it is. This new Blu-ray from Scream Factory has all the blood and guts that made Day of the Dead such a landmark film looking more gortastic than ever. But then that’s pretty much par for the course these days when it comes to Blu-ray and the always excellent Scream Factory. As too are the nice selection of extras to be found on this disc. Now some of them are not new, but at least they didn’t leave stuff off from previous editions, like the very entertaining and informative audio commentary with director Romero, special make-up effects guru, Tom Savini, production designer Cletus Anderson, and actress Lori Cardille. There is also a second commentary track here with zombie fan and filmmaker Roger “writer of Pulp Fiction” Avary. There is a brand new, feature length documentary called “World’s End: the Legacy of Day of the Dead” that runs for nearly an hour and a half. That alone is worth the price of admission, but as they say on the late night infomercials, “but wait, there’s more!” There is a bunch of behind the scenes video, over 30 minutes worth, that was shot by Tom Savini back in the day while making the movie. There is a promo video for the mine where they shot the movie that runs 8 minutes, and if that wasn’t enough red hot mine action for you, there’s another 7 minute featurette about the mines. Trailers, TV spots, and still galleries bring this impressive list of extras to their final rest.

Day of the Dead is a must have for any zombie lover out there, and this new Blu-ray release has the movie looking and sounding better than ever, and with enough extra goodies to choke even the most ravenous flesh eater. This is a no-brainer, folks. You want this new disc. You need this new disc. Think of it as preparation for the inevitable zombie apocalypse that we know is just around the corner. Day of the Dead comes out on Blu-ray on September 17th. It is beyond highly recommended.