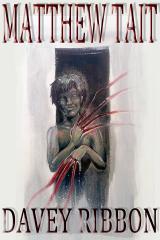 Australian author and Hellnotes scribe Matthew Tait is soon to release a new stand-alone novel Davey Ribbon – available in both print and eBook.

Hidden within the Pitch Pines of Cyclone Cove forty-five years prior, Wyvern Way becomes a sinister backdrop when a young autistic child bears witness to atrocity. Rescued by an unlikely source, the two make a final pact that resonates throughout the future generations of the town.

Though small, the municipal of Cyclone Cove sits at the very apex of cutting-edge technology, thanks to the giant computing firm: Azarcheal Systems Conglomerate. Led by Samara Reagan, the ASC maintains its stranglehold through means sometimes not of the human world …

Elusive and equally mysterious, Norman Perks is a wealthy recluse whose house looks down upon the town like a haunted idol – and whose love of the written word propels him to chronicle the ongoing story of Cyclone Cove.

And at the heart of this story lives Davey Ribbon … a gifted child shrouded in urban legend and the keeper of a legacy now grown to near mythic proportions. As a ghost story for children like the Barlow twins, and an allegory for grown-ups like Jerry Reed and Sean Hunt: Davey’s tale is about to climax. And when the annual Cyclone Fair comes rolling into town, it won’t just be the wealthy and powerful who have a part to play in Davey’s endgame saga.

“Just like his ghostly character, Davey Ribbon, author Matthew Tait latches on with haunting prose that doesn’t let go until the very end.” ~ Greg Chapman, author of ‘The Noctuary’ and ‘The Last Night of October’