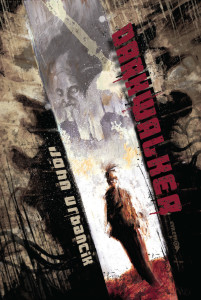 I’ve always been a sucker for dark, urban fantasies involving secret worlds of vampires, lycanthropes, and other supernatural beasties living cheek and jowl with normal humans who more often than not serve as these monsters’ prey. I think I was hooked on this kind of novel when I read Nancy A. Collins’ first Sonja Blue novel, SUNGLASSES AFTER DARK, back in 1989 (if you haven’t yet read that, you’re missing out).

John Urbancik has provided such a novel here in DARKWALKER, and boy is it a doozy.

Jack Harlow is an ordinary guy, with one exception: he is a seer capable of seeing all the monsters who secretly inhabit our world and live along side us. And there sure are a lot of them. Jack doesn’t do anything about the creatures he sees, he’s just a transient who feels a strange compulsion to observe these creatures and record their activities. That all changes one day when he meets a young woman named Lisa, an office worker who, like Jack, is more or less just drifting through life. A whirlwind romance ensues, then an imp-like creature tries to devour Lisa outside her apartment. Instead of remaining content to just watch monsters prey upon humans, for the first time Jack stops the creature and suffers its curse: he goes from being left entirely alone by monsters to having the psychic equivalent of an “eat me” sign placed on his back. Suddenly every monster in the greater Orlando area wants to kill Jack. He and Lisa have just one chance to lift the curse: they have to find the imp who cursed Jack and kill it. They aren’t entirely alone in this struggle, they have the help of Nick, a brutal young monster-hunter who throws his lot in with the doomed pair. Things only go downhill from there.

This sub-genre of people in our world becoming aware of a hidden world of things that go bump in the night are pretty common nowadays. It’s a premise that can be very effective, or it be used to churn out formulaic pabulum. Fortunately Urbancik takes this well-worn premise and puts it to good use. He’s a terrific wordsmith and not afraid to put his own spin on things. The creatures that populate the world of DARKWALKER are intriguingly done, and there are plenty of hints about the broader cosmology of the setting. I am looking forward to what I hope will be the second volume in the series to continue this story. Urbancik has a lot more to say about these characters and setting and I can’t wait to find out more.

Of the three protagonists, I came to like Jack and Lisa quite a lot. They were well-developed, believable, sympathetic characters – they always seemed like real people caught up in dangerous situations that were well over their heads and just doing the best they could to survive. The third protagonist, Nick the more-or-less professional vampire hunter, had a promising introduction, but then he stalled and was never better developed as a character. If there are sequels to DARKWALKER – and I certainly hope there are – I’d very much like to see Nick fleshed out to a greater extent.

If I have any complaints about DARKWALKER, it is that the plot meanders for a bit in the middle when it seems the protagonists don’t know where to go next or what to do. It fairly quickly picks back up though, so this isn’t a show stopper. I should also note that while DARKWALKER is nominally set in Orlando, I never really got a good sense of place in the story. It could be set in any urban area with a small downtown area featuring some sparsely inhabited industrial parks. It might have worked better set in some parts of the Greater Miami area where there are lots of uninhabited condo buildings, for example.

But the ending – oh the ending! It’s a real punch in the gut. This is not a feel-good kind of novel, and the ending makes that indisputably clear. Urbancik is a brave author; not everyone could pull this off, but he does with alacrity. DARKWALKER is highly recommended for those who like tales of modern-day monster hunters. I try hard to avoid phrases like “hard to put down” in my reviews, but that was indisputably the case here. Urbancik is clearly an author to watch, and I look forward to more dark, urban fantasies from him.