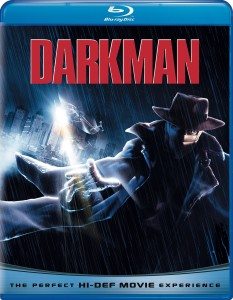 Before superheroes took over the box office, they were an unwanted element in Hollywood. No one wanted to take a chance on them, and with stinkers like the 1979 Captain America staring Reb Brown, the Roger Corman produced Fantastic Four flick that was so heinous that it has never officially been released, or the sad jokes that the once proud Superman movies had become, I can’t blame them. But in 1990, horror golden boy and fan favorite, Sam Raimi, took a chance and put his own dark, frenetic, violent, and hilarious spin on the comic book genre with Darkman. Yes, Sam Raimi did a superhero flick long before the Spider-man movies. Have you seen it? If so, then you already know if you like it out not. Skip down to the part where I discuss the special features on this new Blu-ray.  If you have never seen it, then keep on reading, but be prepared for a wild ride.

Just as this film happened before the big superhero revolt in Tinsel town, this film stars Liam Neeson long before he became a household name in America. Liam plays Doctor Payton Westlake, who is working on a synthetic skin for burn victims. The catch is that his fake skin can only survive for 99 minutes in light. Due to some unforeseen events, Dr. Westlake runs afoul of a thuggish mobsters named Durant, played to snarling perfection by Larry Drake. The good doc is horribly burned and left for dead, but luckily for him he has that synthetic skin, and without much of a face left, he can use the fake flesh to look like anyone. But only for 99 minutes at a time. Still, with his new Man of a 1000 Faces act, combined with near super strength thanks to damaged nerve endings (because why not), Payton will not only get revenge, but to the bottom of the reason as to why he was attack and his life all but ruined. Dr. Westlake will become Darkman!

The strengths of this movie are Sam Raimi’s trademark camera work, killer performances by Liam Neeson and Larry Drake, some fun action sequences, and pitch black dark comedy. It really is a superhero movie unlike any other. It is the superhero movie that is 100% Sam Raimi, and not the watered down, neutered stuff we would later get when he helmed Spider-man. If that sounds like your cup o’ tea, and it really should, and you have yet to see Darkman, then you really should. But is this the Blu-ray for you to get of this movie? Well let’s find out.

This new Blu-ray from the fine folks over at Scream Factory comes with a ton of extras and special features. There is an audio commentary with director of photography, Bill Pope. Now that’s fine, it really is, but was he really the only one out of all the cast a crew that could be found to do a commentary for this movie? Don’t get me wrong, the DP’s job is an important one on movies, but who has ever clamored to hear what they have to say on a commentary track?

While the commentary side of the extras on this disc are kind of lacking, it does have a bunch of nice, and new, interviews on it. There is one with Liam Neeson that runs seven and a half minutes. Another with the villain of the show, Larry Drake, and that one is a more robust 16 minutes. There is one with Frances McDormand that’s close to 11 minutes. Not enough for you? There are also four “vintage interviews” that were recorded back in 1990 when the film was being made. Director Raimi and actors Liam Neeson, Frances McDormand, and Coline Friels all chime in here for over an hour and an half!

In addition to all those interviews, there are a nice collection of featurettes here. One is 13 minutes long and is about the makeup effects with designer, Tony Gardner. There is another 13 minute long featurette/interview with various members of Mr. Durant’s evil crew called “Henchmen Tales.” There is a 17 minute featurette called “Dark Design” all about the look and production design of the movie. There is a short PR featurette simply called “Darkman” that’s six minutes long. Lastly there’s a collection of cast and crew interviews that also have the scent of a press package about it that’s nearly nine minutes long. Additionally, the usual trailer, TV spots, and still galleries can all be found here.

Darkman is still a fun, funny, action-packed, dark superhero flick as seen through the lens of Sam Raimi. It has real star power and, is well directed,and while some of the visual effects haven’t aged well, the film itself is still solid. If you love Sam Raimi craziness, want to see Liam Neeson before most people in the U.S. knew who he was, like your silly mixed in with your violence, or just crave yet another Bruce Campbell cameo (yes, this movie has one of those too), then you will want to pick up Darkman on this amazing looking and special feature packed Bu-ray when it comes out Feb. 18th. It is very well recommended.