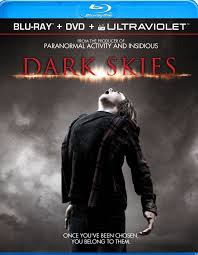 It’s Paranormal Activity but with aliens standing in for the ghosts.

No really, it is. That’s not me just being snarky. It is made by the same production house (Blumhouse Productions) who first shot to fame with the PA movies. The plot outline is a typical American family living in suburbia that starts having weird things happen in their house in the middle of the night. Stuff like something raiding the fridge or stacking everything in the kitchen on top of each other. Because you know, if a species was advanced enough to travel thousands of light years to visit earth, the first thing they would do is play pranks on us. Anyway, this freaks the family out enough so that they put video cameras in every room of their house to capture the weird events on film. And the aliens even act more like spooks than curious E.T.s. They can appear and disappear in an instant, they can enter and exit a locked and alarm-equipped house (and they even let human children in on the fun). When they do show up on video they are shadowy and ghostlike, not the little green or grey guys you would expect. Then the mother and father search the internet for clues, contact an odd expert once they finally start believing and…well am I the only one that has seen this all before?

Perhaps the biggest difference between this movie and the Paranormal ones is that Dark Skies isn’t a found footage film. So hey, that’s something, I guess.

To be sure, there are some of the well-used tropes of the alien abduction genre also sprinkled in to further differentiate things. People lose time, there are blackouts, the parents get implants, animals go crazy, and there are unexplained bruises and scars. In fact, the unexplained bruised bit starts off to be used to good effect when neighbors see the badly bruised body of one of the children and call child protective services. However that plot point is basically forgotten as soon as it’s brought up and doesn’t really play off here. Sadly, that can be said about this movie as a whole.

Now I don’t want you to think that this movie is completely dire, just that it is a mixed bag at best. There are some good scenes of dread, however they are far outweighed by jump scares, very few of which work. Both the direction and acting is competent for the most part. The story is all rather been there, seen that with very few surprises, but it’s not actually bad. All in all this movie has OK written all over it. It doesn’t fail at entertaining but neither does it ever truly excel.

The new Blu-ray/DVD combo pack from Anchor Bay comes with a few special features, but just like the movie, they’re really not exceptional. This is an audio commentary with the director, producers, and editor and then a few alternate and deleted scenes that don’t add a thing to the story. And well, that’s it.

So if you’re a fan of the Paranormal Activity movies and ever thought, “Hey, you know what would make these better? Aliens!” then this is the movie for you. If you’re about tired of all those type of Activities, then Dark Skies won’t do a thing to change your mind. If you fall into the former category then consider this one mildly recommended. If you’re not part of that group, then you might want to give this one a pass.