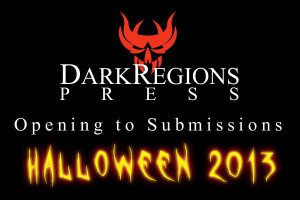 Dark Regions Press will be launching three new open-to-submission lines in 2014. After long-planning to open to submissions to the public in Q1 of 2014 (around February or March) DRP has decided to open to fiction submissions to Kickstarter backers exclusively starting on Halloween of 2013. Submissions will open to the public in Q1 of 2014 as originally planned.
All backers of the Kickstarter campaign for Joe R. Lansdale’s Black Labyrinth Book II will receive instructions on Halloween (Thursday, October 31st) on how to submit their original  fiction of horror, fantasy or science fiction to Dark Regions Press for potential publication.
Submissions from Kickstarter backers will receive top priority for fiction considered in the three new lines. Pledge as little as $1 to the campaign and receive the advance submission instructions! This is DRP’s way of thanking their backers who have shown them incredible support so far, helping the campaign for Joe Lansdale’s new novella reach 46% funding after two weeks!
Don’t miss the Halloween opening to fiction submissions from Dark Regions Press, join the Black Labyrinth Book II Kickstarter campaign with any pledge level: http://www.kickstarter.com/projects/chrismorey/black-labyrinth-book-ii-joe-r-lansdale

Alternatively, submit your fiction next year when DRP opens for submissions to the public.

The DRP staff looks forward to reading your fiction of horror, fantasy or science fiction!