The new collection Ghosts of Punktown by Jeffrey Thomas, based in the author’s critically-acclaimed science fiction horror megalopolis known as Punktown, is now available in ebook, trade paperback and two signed limited edition hardcover formats. Read the full details on the book at: http://www.darkregions.com/books/ghosts-of-punktown-by-jeffrey-thomas
The book is offered in ebook, trade paperback, signed limited edition hardcover and signed deluxe cowhide-bound slipcased hardcover. Featuring stunning front cover art by renowned artist Kris Kuksi, the deluxe hardcover edition dust jacket will include a 2nd piece by the artist. The signed hardcover editions will include an exclusive story entitled “Another Ghost” not found in ebook or trade paperback editions.
“Whether (Ghosts of Punktown) is your first visit to Punktown, or you’re a long-time resident, you’ll certainly find at least one corner of its twisted streets to call home.” – Rue Morgue Magazine
“(in Ghosts of Punktown) Jeffrey Thomas proves once again to be an amazingly talented writer, being able to make the reader feel a connection to the characters in these stories, and to Punktown itself.” – Horror After Dark
“(Thomas) has an unusual perspective that makes most of his stories feel just slightly off center, which means that I’m constantly surprised by the directions they take…The setting is unlike any other space colony you’ve ever read about and I guarantee you will not be bored here” – Don D’Ammassa, Critical Mass 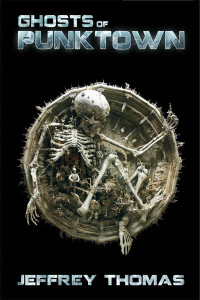 ​
Ghosts of Punktown by Jeffrey Thomas is one of the most anticipated Dark Regions Press titles of 2014. Available now on both DarkRegions.com and Amazon.com
Description
NINE TALES OF THE DARK CITY KNOWN AS PUNKTOWN
Monsters, mutants and maniacs…here, they call them citizens.
In the opening story, “In His Sights,” shape-shifting war veteran Jeremy Stake (protagonist of Thomas’ novels DEADSTOCK and BLUE WAR) is reminded of the last enemy soldier he killed, every time he looks in the mirror…while the concluding story, “Life Work” (Thomas’ first novella-length Punktown story), follows a young businesswoman with a secret past and a syndicate hit man with no future. Between these tales one will encounter a wide and wild variety of the lost souls, both human and other-than-human, that haunt the streets of Punktown.
Table of Contents
Introduction: A Taste of Punktown
In His Sights
Relics
A Semblance of Life
Bitter Brains
Disfigured
Imp
The Room
Into My Arms
Life Work
* Another Ghost – Hardcover Exclusive
Features
Both signed hardcover editions feature a new and exclusive Punktown story entitled “Another Ghost” by author Jeffrey Thomas not offered in ebook or trade paperback editions. The deluxe slipcased hardcover edition features another artwork piece by artist Kris Kuksi on the back cover of the dust jacket. The deluxe hardcover edition will be housed in a custom Ghosts of Punktown slipcase. 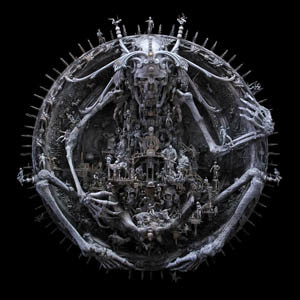 ​
About the Author
Jeffrey Thomas is the author of such novels as Deadstock, Blue War, Letters from Hades, and The Fall of Hades, and such short story collections as Punktown, Nocturnal Emissions, Thirteen Specimens, and Unholy Dimensions. His stories have appeared in the anthologies The Year’s Best Fantasy and Horror, The Year’s Best Horror Stories, Leviathan 3, The Thackery T. Lambshead Pocket Guide to Eccentric & Discredited Diseases, and The Solaris Book of New Science Fiction. Forthcoming from Miskatonic River Press is a role-playing game based upon Thomas’ universe of Punktown. Thomas is also an artist, and lives in Massachusetts.
Resources
Press Release: http://www.darkregions.com/ghosts-of-punktown-by-jeffrey-thomas-press-release/Web Banner: http://www.darkregions.com/template/images/books/fiction/ghosts_of_punktown/ghosts-of-punktown-release-banner.gif