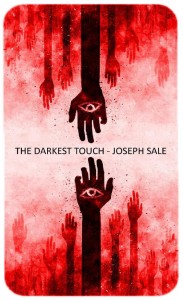 NORTH KINGSTOWN, R.I. — Dark Hall Press is proud to present its newest release, The Darkest Touchby Joseph Sale. (Horror/Urban Fantasy)
In the aftermath of a world-wide nuclear conflict, dark forces have taken control in New York City. Gifted with powers beyond reckoning, the Touched have inherited the after world, instating their own notion of order, and killing all who oppose their rule. But rebels are gathering, along with strange voices that sound in the deep, and the dark city is about to go even darker.

As of today, April 11th 2014, The Darkest Touchwill be availalble for purchase via Amazon, Barnes & Noble, and other such sites in both Kindle and print editions.

Joseph Sale is novelist, poet, musician and performer, originally from Bournemouth. He studied English with Creative Writing at the University of Birmingham. His short stories have appeared in magazines such as Silver Blade and Fiction Vortex.

Dark Hall seeks to promote a diverse body of quality works, advancing the tradition of Horror storytelling as well as providing exposure for up-and-coming writers.

All Dark Hall titles are published in simultaneous eBook and paper editions, with distribution of the latter via Ingram.