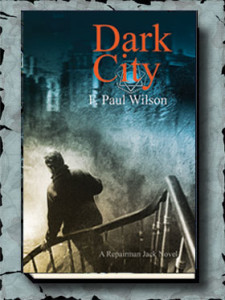 Welcome to the house of cards that Jack built.  In a world where everything he loves threatens to crumble down as easy as Sunday morning, Jack is the ultimate anti-hero, though he never asked to be one.  Between his rock solid principles and natural flare for stirring up the hornet’s nest and somehow making it out alive – albeit bruised, battered and scared – Jack finds himself in the center of a violent hurricane of events that not only puts the squeeze on the peaceful existence he’d much prefer, but that of his friends and the whole damn country.

Dark City is the second novel in the Repairman Jack early years trilogy and opens up like a freight train heading straight towards an unavoidable brick wall, and hardly lets up from there.  Between trying to avoid the Machete welding DDP gang who want his right foot, helping the murderous Mikulski brothers foil a sex slave operation, scamming a scammer who’s out to take over his favorite bar, and dealing with a Brooklyn based band of Jihadists who think he’s spying on them and therefore want him dead, there’s not a whole lot more that could ruin Jack’s day any more.  Except, of course, there always seems to be one more thing lurking around the corner just for him.

As the nail biting multi-layered plot twists unraveled, I couldn’t help but be reminded of the late Elmore Leonard who, as far as I’m concerned, penned the most believable dialogue in the business.  F. Paul Wilson all but matches that raw, natural style which I hope he accepts as the compliment it’s intended to be.  Readers can easily pick out which character they’re “overhearing” based on their unique language and speech pattern alone, which I think you’ll all agree is exactly what great dialogue writing should do.  Suffice to say F. Paul Wilson proves, without a doubt, he’s a master at it.

This is the first – of many more to come, mind you – of F. Paul Wilson’s work I’ve read.  If you’ve already been enjoying the Repairman Jack novels to date then I’m guessing you don’t need this review to explain why Dark City is a must read.  You already know that.  But, if you’re either mildly familiar with the man’s work or, like me, new to his craft altogether, then you might be wondering, how does it measure up on its own?  You won‘t be disappointed.

Now, if you’ll excuse me, it’s time to turn the stage over to the multi-award winning author who first brought Jack to life all those years ago, Mr. F. Paul Wilson.  Turns out he had a few things to say about Repairman Jack.’s Dark City and was kind enough to let me pick his brain a little.

Dark City is available through Amazon online or as a limited edition through Gauntlet Press’s web site.

Hell Notes: Mr. Wilson, while this is the first – of many, I can now safely add – of your Repairman Jack novels I’ve read and immensely enjoyed, would you suggest readers catch up on their Repairman Jack homework in order to get the most out of Dark City, or did I have the right idea starting with book one of the prequel series?

F. Paul Wilson: COLD CITY kicks off the Early Years trilogy. DARK CITY is next. FEAR CITY ends it next year. The trilogy is designed for both the newbie and the hardcore RJ fan. Just like Jack, newbies will be meeting for the first time characters who will pop up to varying degrees in the later books. Seasoned fans, who’ve wondered how Jack got in with these folks, will have their questions answered.

HN: I’ve known authors who have had entire worlds mapped out in their mind’s eye or even physically outlined on paper well before novelizing their worlds into a series. How premeditated might the details for this prequel series have been in comparison to what’s already been published of the complete series?

FPW: The first Jack novel, THE TOMB, was intended as a one shot, so I had nothing mapped. I waited 14 years to do the second because I feared a series would take over my career. With the end of this trilogy, I will have devoted 22 novels to Jack. So I guess I was right: He took over my career. I’m looking at the trilogy as a 3-act play backfilling Jack’s first years in Manhattan. Abe and Julio will play a big part in his life. Here’s how he met them. The Mikulski brothers have had cameos in a few books. Readers have wanted to know more about them. Now they will. The brothers teach Jack a crucial lesson.

HN:  Was the path always clear to you?

FPW:  Not at all. Once I committed to the series, I had no plan other than I knew it was going to be closed-ended — looping out from THE TOMB and ending (along with most of human civilization) with NIGHTWORLD. How many books I ended up with, and how I was going to reach NIGHTWORLD, were totally up in the air. The first nine books can be read in varying order, but you should have all those under your belt before you tackle HARBINGERS, which is full of spoilers for the first nine. By book 11 the backstory started gaining weight. As it approached critical mass I could no longer make the novels stand-alones. They began to run into each other. That was when I knew I had to head for NIGHTWORLD.

HN:  How important was it for to you to have written the Repairman Jack series in the order it’s now in rather than starting with young Jack and writing onward from there? How might writing the prequel trilogy first have affected your approach to writing the story’s arc as it is currently known by?

FPW:  I wouldn’t have known Jack anywhere near as well. After writing the mainline of the series, I knew him inside and out. Going back with that in my head allowed me to show you the raw material in the 21-year old led to that guy you’ll meet later on. He’s also a different character at this point. He hasn’t the weight of experience, he’s unschooled, he makes mistakes — terrible, tragic ones. But you see him learn from those mistakes, and that’s why he does what he does later on.

HL:  There is no doubt to how richly cinematic in style Dark City (and presumably the others, too, from what I’ve heard) are written in. Are there any film options in the works for those of us who enjoy a well adapted film translation of our favorite novel?

HL:  And what dangers and adventures can we expect Jack to lead us to next?

FPW:  After FEAR CITY in 2014…none. I’ll have said what I want to say about Jack and will move on. That’s not to say if I come up with a great stand-alone idea that’s perfect for him that I won’t use it. Of course I will. But you will not be seeing a new Repairman Jack novel every fall as you have since the 90s. I want to walk away on a high note — because it’s time, not because I’ve beaten him to death.