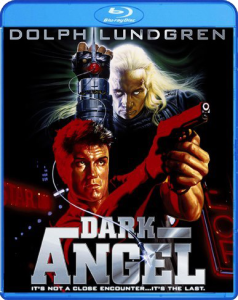 Dark Angel, released in America under the more awesome title of I Come in Peace, is a fine example of 80s sci-fi action goodness. Yes, I know it came out in 1990, but I stand by my statement that it is a thoroughly 80s movie. From its neon-lit nightclubs right out of Miami Vice to its synthesizer-heavy soundtrack, from the preppy drug dealing gang called The White Boys to its tough cop who plays by his own rules and spouts awesome one-liners, it is completely 80s-licious. And if you’ve read more than a couple of my reviews before, then you know that’s right in my wheelhouse. So yeah, I am an easy mark for this flick, I admit it. If you are also a fan of 80s action movies and have somehow missed out on seeing this film, go ahead and stop reading right now and just pick up this Blu-ray. You’ll love it, and the less you know about it before hand, the better. But if you still need some convincing, continue reading. I mean I already wrote the review and all.

In this movie Dolph Lundgren, of Ivan Drago from Rocky IV fame, plays a hardnosed vice cop from Houston, Texas, named Jack Caine. Yes, I said Texas, which I got to admit, seemed kind of weird here. I mean there was not a single cowboy hat to be seen in this film, and this flick just screamed out for the L.A. scene. But whatever, back to the story. Detective Cain is looking for a big pile of heroin that was stolen from the police evidence locker by the notorious White Boy gang. Unfortunately, an eight-foot-tall, white-eyed alien drug dealer with a killer CD shooter (no, really) is looking for the same score. Not to sell it, as heroin is such a mamby pamby Earth high and not worth the couple of light years it takes to get to our backwater planet. No, Mr. Huge Alien likes to take the heroin, shoot people up with it, and then when they’re happily tripping, he rams a foot long spike into their head and sucks out their brain juice for the endorphins the smack produces in people. It seems that brain juice is the drug of choice for the outer space set.

Well Dolph ain’t gonna stand for that kind of intergalactic monkey business in his city, so it’s alien hunting time. Unfortunately he also has to deal with a contract put out on his life, a forced partnership with a by the book FBI agent, the drug peddling of the overly entitled White Boys, the stereotypical police captain who thinks he’s just a loose cannon that really needs to take a vacation, oh and a second, ginormous, white-eyed alien stalking the streets for unknown reasons. All this mixed together is a recipe for awesome sci-fi tinged action perfect for the decade of excess. There are gun fights, explosions, car chases, tough talking, explosions, comic relief supplied by Brian Benben as the straight laced fed, awesome one-liners, explosions, kung fu kicks to the head, an alien weapon that shoots out people-seeking deadly mini CDs, stunts galore, oh and massively over the top explosives. If that sounds like your kind of movie, you’re right, it probably is.

Now on to the extras on the new Blu-ray from Scream Factory. There is a sizable featurette on it called “A Look Back at Dark Angel” that runs over 24 minutes and is a behind the scenes retrospective with actors Dolph Lundgren, Brian Benben, and director Craig R. Baxley. I found it very enjoyable and informative, and perhaps the best bit is a story Brian Benben tells that begins with, “Dolph almost killed me once…” Yeah they just don’t make movies like this no more. Sadly other than the theatrical trailer and a poster and still gallery, that’s all there is for special features here. Yeah, that means this Blu-ray is a little light in the goodies department, but the fact that it is out on BD at all when there are still many other movies that have yet to come out on Blu-ray, well that’s special enough for me.

Dark Angel is the type of fun, silly, and deliciously machismo-fueled action movies they just don’t make any more, and that’s a huge shame. I would gladly give the super hero spandex crowd a break (you know, what passes for action flicks these days) and give the badass cops of the 80s some big screen time. Since it is sadly unlikely to happen, the next best thing is to get high-def copies of movies like Dark Angel and bask in the goodness from days gone by. So for sci-fi action junkies everywhere, I give this new Blu-ray a high recommendation.