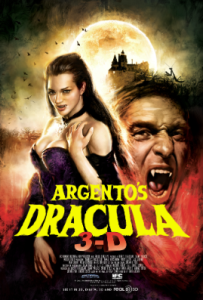 Dario Argento is one of the true masters of the horror genre. Beginning with 1971’s The Bird with the Crystal Plumage and including such horror/thriller classics as Deep Red (a favorite of mine!), Inferno, and Tenabre he proved himself to be a more violent heir to Alfred Hitchcock. His crowning achievement, 1977’s Suspiria is one of the true horror classics and took horror filmmaking to an almost artful level.

Argento has always been a genius when creating mood by painting the screen with darkly beautiful sequences and using eerie, creepy music done by the likes of Pino Donnagio, the great Ennio Morricone, and most successfully the Italian Prog rockers Goblin. Many of his films are horror classics full of strikingly red blood and brutally horrifying scares.

Since the mid-nineties, Argento has been hit and miss in his film choices and over the last decade has divided fans with his last two films, the silly but enjoyable Mother of Tears and the misguided and lazily directed, but again still enjoyable, Giallo. Both films were either revered or dismissed by his fans. I did like both of them for various reasons but am in agreement that the master has lost his way in bringing true terror to the screen.

His best work in the past decade has been his episode for season one of the sadly missed Showtime horror series Masters of Horror. It was called Jennifer and it displayed Argento’s bloody, violent, style mixed with the macabre humor that had been missing from his films for quite a while. It was a great segment. His effort for season two, Pelts was okay but nothing to remember fondly.

Now the Italian master returns with Dario Argento’s Dracula 3D. His is a more sexual take on the tale but the film stays fairly close to the original story.

After an opening that we expect from Argento where we are treated to a graphic sex scene followed by the woman being violently attacked and turned by Dracula. As we know from the Dracula legend, we begin with the arrival of Jonathan Harker, played by Spanish actor Unax Ugalde. He is there to speak with Count Dracula about some real estate business and is attacked by one of Dracula’s female minions. As she tries to drink his blood, an angry Dracula roars in claiming Harker for his own. It is a well done sequence and gives us a taste (forgive the pun) of the true beast within Dracula.

From here we meet Lucy, played by Asia Argento, the director’s daughter and Mina, played by Italian actress Marta Gastini. We know that Mina resembles or could be the resurrection of Dracula’s lost love from centuries ago. As goes the legend, Dracula begins his quest to make her love him again and become his eternal mate.

Asia Argento has always been an actress that I admire. She is not afraid to take chances in films and has done an array of genres, always playing bold characters. Here, as Lucy, she is fine and nicely underplays her role. She is the character who is bitten by Dracula and keeps leaving her crypt to find food, mostly children as they are easier and fresher prey according to Bram Stoker’s novel.

It is a bit unnerving that she does a full frontal nude bathing scene where she is washed by another woman who discovers her bites on the back of her knees. The scene is meant to be a bit sensual but I couldn’t get past the fact that it is her father directing the moment.

Most of the supporting cast, as in all of his films, are Italian actors overdubbed later by American or British actors so you can’t really say whether they are good or bad. Having been a fan of Argento’s for decades and having seen all of his films, I no longer give these things a second thought. It becomes a part of the aura of his films.

The two main performances in the film that work are Dracula and Abraham Van Helsing. Dracula is played by German actor Thomas Kretschmann who starred in Argento’s 1995 thriller The Stendhal Syndrome, but has shown up in varied films such as Roman Polanski’s The Pianist, Guillermo Del Toro’s Blade II, and Peter Jackson’s King Kong. As the count he is very good as he presents a true monster who is sly, suave, but always menacing. He is always dressed in a black suit that a rich Count would wear but he never wears a cape. At first I missed the cape but then settled in, as Gary Oldman, who gave a brilliant performace in Coppolla’s version, chose not to wear a cape either. It worked there and it works here. I liked Kretschmann’s portrayal very much.

The great Rutger Hauer plays Van Helsing and his performance harkens back to the Peter Cushing portrayal of the character. Most actors, Anthony Hopkins from Francis Coppola’s bloated version being a shining example, choose to play Van Helsing as a half-crazed lunatic out for blood and vengeance. Hauer plays him normal. His Van Helsing is a man who knows he needs to destroy Dracula to save the world but realizes that he is a mortal dealing with a monster. He carries sticks to make into crosses and has nothing else but his nerve, his wits, and a wooden stake that he must drive through the vampire’s heart. There is a bit about being able to shoot the vampires with garlic infused bullets but I found that silly.

As I said. Argento and his two fellow screenwriters stick pretty close to the original story but ad a silly subplot where we discover that Dracula has a standing agreement with the leaders of the town where he allows them to prosper in wealth but, in turn, Dracula is allowed almost unlimited privilege to feast on certain townsfolk. That would seem like a bad deal, as there are maybe less than a hundred people in the town and, after a while, Dracula would have eaten them all. However, the scene where the heads of the town secretly meet with Drac to try and change the deal and drive him from the countryside is wonderfully creepy and ends with a marvelously bloody and grotesque finale.

Another touch that I enjoyed was the fact that Dracula takes the shape of many creatures. He is not just a bat but morphs into an owl, a wolf, a massive amount of flies, and in a rather preposterous and head scratching scene, the Count turns into a giant Praying Mantis and kills a man in a house. The other transformations were neat but the Mantis sequence is really laughable.

The film is bloody and Argento shows his flair for interesting and original ways to stage violence and stays true to his penchant for the brutal. There are killings by axe, wooden stake, etc. and all are powerfully violent. When vampires bite, it is not romantic in the least. Argento shows us that these are monsters and humans are their food.

The retro production design is excellent and beautifully done by Luciano Tovolilli, who is working with Argento for a third time after his striking work for the director’s Suspiria and Deep Red. It looks as if the film was made in the late 1960’s or early 1970’s.

The music is a top notch fully orchestrated score by Claudio Simonetti, a member of the Italian rock group Goblin, who have scored for Argento many times as a group or just Simonetti on his own. It is a lush and striking score that we don’t get to hear in today’s films.

The director’s idea to shoot the film in 3D seems to be a last ditch effort to stay relevant in today’s changing film world. There are moments when he uses it for fun but I could have done without the now tired gimmick. The effect did not enhance the film nor the story. When filming a story that has been done countless times, a director does need to give it perhaps a new visual flair or approach but 3D was not the way to go here.

The film is not perfect and has its ups and downs. There are times it goes from interesting, to violent, to downright silly. Some scenes play well and others are very stiff. There is much to behold and much to deride. It is at times visually stunning while some sequences fall flat. The terror scenes are well done but there is no regard for pacing as a lot of the film feels sluggish.

There are moments to marvel at and moments that cause unintentional giggles. But so are the films of Dario Argento. Yes, he has made many great films and at least three classics but he has never been known for coherent screenplays nor powerful dialogue. Argento is an artist of mood and visualization. Even his masterpiece, Suspiria, is flawed when it comes to its screenplay.

It has been said that Argento has lost the magic he once had. I disagree. When some filmmakers get older their styles are not as welcome by newer generations. Genre filmmakers such as John Carpenter, Tobe Hooper, George A. Romero, and Walter Hill have all done sub-par work with their last 2 or 3 films. They are all great directors and I can’t believe that they, along with Argento, have lost the genius they once showed. I feel that they are hampered by a changing studio system, forced smaller budgets, and audiences who have no patience for good storytelling mixed with stylistic and sometimes artful direction.

For Argento, perhaps he just needs a rest to fully flesh out his next scripts and bring back the full flair for horror that he once showed.

This new version of Dracula will divide fans of the director and Bram Stoker purists. The combination of Dracula and Dario Argento should have been a dark, twisted, sumptuous, and bloody masterpiece. It is not. For me it is a mixed bag but, for the most part, it works.