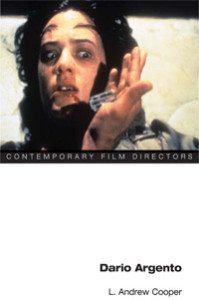 This book on Dario Argento has been out for a bit now but I think has gotten unjustly overlooked (I was only recently made aware of it myself as well) – at least in the horror world. So I thought I would give it a much-deserved review and push. Andrew Cooper is an assistant professor of film and digital media at the University of Louisville and actually taught a course on Dario Argento at Georgia Tech (which led to the book in this focus) back in 2010. So anybody who pushes the Italian master in the education circles is okay in my mind. The fact that the book itself is quite well written and interesting makes it even easier.

The book breaks down into four sections following Cooper’s Acknowledgements and Introduction: Against Criticism: Opera and The Stendhal Syndrome; Against Interpretation: The First Five Gialli; Against Narrative: The Three Mothers Trilogy and Phenomena; and Against Conventions: From Trauma to Giallo. Each section has a overview and examination of each film and links them within a thematic area. Two rare previously only French language interviews with Argento are translated and run at the end of the four sections, followed by credits list for each movie. This caps it off nicely.

Although there aren’t necessarily any new or startling revelations about Argento and his film work per say, the book is a nice critical look at his work with some photos sprinkled throughout the book. The two interviews are a nice bonus as well and help to increase it’s value.  Cooper also includes synopses of two lesser known Argento works, the Television production Door Into Darkness and the historical feature Five Days In Milan, that are often overlooked by most critics and fans.

Overall and excellent study on the Italian Hitchcock himself and a book I would recommend picking up, whether you are a casual fan of Dario Argento or a super fan.