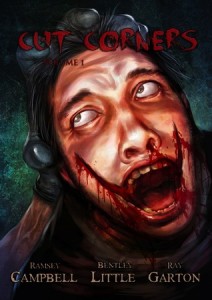 Sinister Grin Press never fails to impress with their publications. Cut Corners, Volume 1 is no exception. From the cover designed by Shane McKenzie – which is delightfully gruesome – to the stories within, this chapbook a must-read for every horror fan.

Ramsey Campbell starts it all off with his story “The Address.” Fraith, an elderly man living with his daughter and her children and not sure how much he is actually wanted there, gives the family a break one day by taking a long walk. He loses his way while trying to get back to the train station, and can’t find anybody who will give him a straight answer on where it is. He thinks he may have found help when he happens upon an event at a school, but realizes there is no assistance there or anywhere else for him.

The second story, “Conversation Between Two Women Overheard at My Dentist’s Office” by Bentley Little, is told entirely through dialog. Two women who haven’t seen each other in a while run into each other while getting check-ups. One of the women has a loose tooth, and regales her friend with a bizarre incident on how it happened. Not to be outdone, the friend has a story of her own – and it’s a dark one.

Ray Garton completes the chapbook with “Autophagy.” In a future world that sounds like a very unpleasant place to live – almost everything is illegal, including sex outside of marriage, having a baby out of wedlock, and being gay – a man is having an affair, but thinks he’s going crazy because things are leaving his body and hiding from him. He can hear them whispering. He decides to confess this to his girlfriend, but she beats him to it, since she’s experiencing the same thing. With this secret burden out in the open, the couple decides to go to her house to finally consummate the relationship, not caring that it’s a crime. Before they can, however, it becomes obvious that neither one of them is crazy, but what is happening is worse than insanity.

All three stories are fantastic. How could they not be? The authors are legendary, and having them share this chapbook is a treat. It’s available in both tree and e-book format, but if you can get a hard copy, don’t hesitate. This is a treasure.

I really hope there will be a Volume 2 soon!