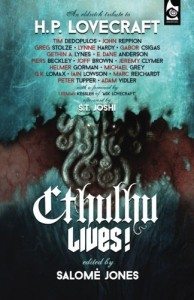 How can you not like an anthology that, before you even read a single story, already has three things in its favor: a foreword by Leeman “Ask Lovecraft” Kessler, an afterword by S.T. Joshi, and most importantly, 17 new stories, none of which are by the usual group of writers that seem to appear in every Lovecraft anthology.

Editor Jones’s previous anthology Red Phone Box (2013) wove the stories of 23 different authors together in such a way as to be distinct tales but interconnected through an underlying story arch.

Essentially, Jones has done the exact opposite in Cthulhu Lives!, where the lack of connectivity essentially evokes the basic Lovecraftian tenet that the irrelevancies of mankind are beneath the notice of an uncaring universe, and that mankind’s interactions with the Old Ones are unnoticed to the gods, and mind-rendering and messy for mankind. Jones has carefully avoided the twin traps of overt pastiches and generic stories that simply drop a familiar name or book title. Instead, she has chosen stories that evoke the themes of cosmic horror and fear of the unknown without slipping into tropes. The story lengths swing wildly in both directions, a calculated risk by Jones in her selections. It works because the stories are a diverse lot, leaping from steampunk Victorian England to a modern day physics lab, from England to Australia to North America. Some stories are a bit more obvious in their influences such as “Hobstone” by G. K. Lomax, which is evocative of “Rats in the Wall,” while “The Highland Air” shows author Gethin A. Lynes to be a devotee of “The Case of Charles Dexter Ward.” This is an observation, not a complaint; all the stories evoke the classic Lovecraft disquiet of the unknown that quickly escalates into abject terror. If you’re looking for stories from the wretched interpretation of Lovecraft where professors sail through space on then the backs of byakhees, you’re in the wrong book.

Cthulhu Lives! is a solid addition to Lovecraft fiction, respectful of the source material but willing to test the boundaries. Salomé Jones has done a remarkable assembling this collection and Ghostwoods Books should be encouraged to pursue similar projects.