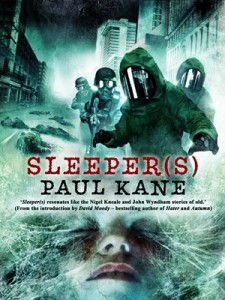 The sleepy English locality of Middletown is about to get even sleepier, as a strange malady starts to affect the population. It spreads quickly, causing the authorities to quarantine this small city, and seek out the only person who might be able to help: Doctor Andrew Strauss. However, Strauss has a secret, one that has linked him to this place all his life, one that has linked him to a particular person there, though he doesn’t yet know who. But he’s not the only one hiding things – and as he ventures into Middletown to collect samples with an army escort, a mixture of UK and US troops, cracks soon begin to appear in the operation. Especially when his team come up against the most terrifying threat humankind has ever known… From the imagination of the award-winning and bestselling author of Who’s Been…? and RED (optioned for film and turned into an award-winning feature script), this chilling reworking of another well-loved fairy tale reads like a heady mix of The Andromeda Strain, Inception, Outbreak and Quatermass, and is a tale that’s bound to delight genre fans the world over.

*Available from all Amazon outlets in paperback and Kindle (DRM disabled).

“… Kane starts with the shocks just a few pages in, as the bodies start to collapse under the power of this strange disease. The novella is thoroughly researched with an air of authenticity to it, particularly where the biology and science is concerned. Strauss is also a rather interesting character; he is damaged and flawed, putting his six year friendship and relationship with assistant Bridget in danger through his irresponsible actions and his obsession with a woman he dreams about every night. A woman who can’t possibly be real. Or can she? It is clear Kane has been influenced by the work of John Wyndham and he is happy to admit this, as Kane indulges his inner fanboy with lots of classic SF references. There is a bonus short story at the end, Masques, which I suspect is a Poe adaptation from his forthcoming book Rue Morgue. A good solid piece of SF/Horror, Kane proves why he has such a good reputation within the genre. Worth your pennies!”

“Sleeper(s), by Paul Kane, is a rapidly moving tale of nature and science gone awry. Add in booze, sex, cultural diversity, and political subterfuge, and I believe Mr. Kane has something here for every one. Some parts of this story are amazingly in line with my own thoughts regarding the possibilities of the evils that governments sometimes engineer, or might, given the chance. I am not a believer in having Prologues in books, tending to feel they give too much of the story away. However, the one here was skillfully used and added to the book. Even better than that was the Epilogue. This was a superb piece of prose having me say,’Look at the possibilities!’ That being said, I am hoping that Mr. Kane sees fit to share a second book with us. This could be a series. Paul Kane is a superb author. I most highly recommend you read Sleeper(s).”

“you take Quatermass Experiment (and Xperiment), Quatermass and The Pit, Day of the Triffids, Night of the Triffids, Outbreak, The Andromeda Strain, Lifeforce, Inception — throw them all into a blender, grind into tasty chucks, and you’ll come out with something like Paul Kane’s novella Sleeper(s). This page-turner will make you scream, laugh and think — sometimes all in the same sentence. Highly recommended”

“With his take on the zombie/military genre, Kane shows off his action pedigree in the infectious Sleeper(s), keeping the pages turning at a blistering pace. You’ll be kept awake by this tale of a English town that refuses to sleep soundly!”

– Daniel I Russell, award nominated author of Critique and Tricks, Mischief and Mayhem.

“Suzie is a little girl on a picnic with her family. She wanders off to explore and finds the most beautiful flowers she’s ever seen. They’re so pretty she decides to pick one to show her parents. When one of the thorns pricks her finger, she gets sleepy, oh so sleepy, and falls asleep on the ground before she can return to their loving embrace. So begins the possible end of mankind. Sleepers is a tale of potential disaster, near-apocalypse and the folly of mankind. Suzie isn’t the only one affected, she’s just the first, and as others fall prey to this dread malady, good guys and not-so-good guys race to contain and control the spread of this coma-like sleep. Not only are those afflicted unable to be roused, they exude a cocoon-like substance from their pores. Then, when all is seemingly lost, they rise. Oh no, I know what you’re thinking. These are decidedly not zombies. They’re ‘sleepers’, not dead but not under their own control either. Bullets can’t stop them, fire consumes but does not destroy, but maybe there’s still a chance for a cure. Whatever controls the sleepers, well, it doesn’t want a cure and it drives those under its influence to assimilate its enemies into its embrace. Proving he’s not stranger to plot twists, Paul Kane takes us on a tense ride and squeezes us until we’re so anxious we nearly pop. It’s deadly certain that Sleepers is no sleeper. You’ll be up all night trying to get to the last page.”

“Kane’s Sleeper(s) is a rip roaring adventure horror, that will, ironically, give the reader many a sleepless night. Fans of Quatermass will love this book.”