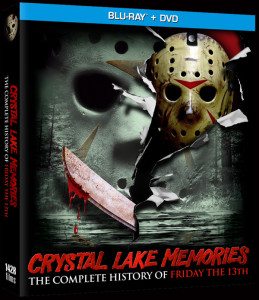 If you are a fan of the Friday the 13th movies, you must get this.

No, really, you do. No questions about it.

Now I have heard some naysayers out there amongst the Friday faithful. I’ve heard all the complaints, so let me debunk them for you.

“Everything in this new documentary was already covered in the last one, His Name Was Jason.” Wrong. That doc was 90 minutes long. This one is over 6 hours! So yeah, it is scientifically impossible for all this info to have been in that other movie. Sorry but you can’t argue with science.

“Oh I know all the info that’s on this documentary already.” Wrong. I know I don’t know you, so how can I say that? Well I do know myself and I am a fanatical Friday the 13th fanboy. I know a lot about all of these movies. Probably too much. Yet there was still a lot of stuff on here that I didn’t know. Inside bits, candid info, and the “raw” stuff you don’t get in the usual “oh everyone had such a great time making this movie” special features and press stuff. So if anyone says that they already know about all the stuff in this documentary without seeing it, either they’re mistaken, or out and out lying.

“Who wants to watch a 6+ hour documentary?” No one is putting a gun to your head and making you watch it in one setting. I mean, I did, but then like I said, I’m a special kind of fanatic. This monstrous doc is broken up into bite sized chapters, each one covering one of the movies, and one devoted to the Friday the 13th TV show. So you can sit down, watch for as long as you want, then come back some time later and pick up where you left off. It’s just that easy.

“I already have the Crystal Lake Memories book, so why watch the documentary?” Well that is a good question. I also have the book (is anyone surprised?) and there were some bits in this doc that I don’t remember being in the book. Besides, why read when you can watch the movie. It’s the American way, damn it!

So sorry, but if you call yourself any kind of fan of the Friday the 13th films, then you must get this doc. Even if you think you know everything about these slasher flicks, it is a fun watch regardless. It’s a fond trip down memory lane with plenty of clips from the films, behind the scenes video and photos, and pretty much everyone and anyone who were involved with these movies. I say ‘pretty much’ because there are some notable names absent here. Naturally Kevin Bacon is too cool for school to be in here, but surprisingly so is Crispin Glover. What, does he think he’s Kevin Bacon or something? A few more people are also missing, but far more are in here than not. The whole 6+ hour show is narrated by Corey Feldman who does a very fine job. Mind you, I am not a Feldman fan, but I did really like the guy here. If that’s not enough gabbing for you, there is even a commentary track that runs the entire impressive length of the doc.

There are no special features on this new Blu-ray/DVD combo pack from 1428 Films. But then, it’s a 6+ hour documentary! The whole thing is one giant special feature.