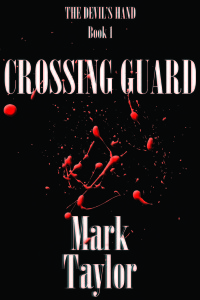 I group Mark Taylor’s dark fantasy/pulp horror-romance Crossing Guard in with Richard Kadrey’s “Sandman Slim” series, one of which I reviewed a short while ago. They are both great examples of what I now call: Hell noir.

For me Hell noir means that the story has a character that hails from Hades or the setting takes the reader there at least once. Pair that with a crisp, yet creepy description of the big “H” itself—be it in positive or negative terms—and a mystery or impossible task for good measure.

Crossing Guard features Darin, who is the right Hand of the Devil himself. He’s given tasks that no one else can or wants to do. Like chase after monsters that have somehow crossed over to the human world. While the Hand has his powers, they are limited. Taylor places him in situations where you wonder, “Does the Devil hate this guy? Because he’s not making this easy.” And I like that it isn’t easy. I appreciate reading about a protagonist struggling to do things. Darin takes his lumps in this story all while maintaining a stiff upper lip.

But Taylor doesn’t make his hero go without some powers. And when this demonic bounty hunter finally is pushed to the edge, he is a force of nature with a command of creatures to make your skin crawl.

And he needs it.

Crossing Guard is dark, but it isn’t without its comic touches. They’re kept light, enough to give you a breather when the tension runs high.

In Book One of this series, Taylor creates characters that you can give a damn about and that can be a challenge to do in such a short space of time. They are familiar almost instantly and I found myself drawn into the world he created: the misty, rainy streets of London and a mad dash for the underground tube. Although I stumbled over a few of the British English terms, I found my footing quickly without losing the flow of the story. I also found myself looking forward to the next installment in The Devil’s Hand series.

I was able to connect with the main characters quickly, which is important for a novella or short story. Well-plotted, atmospheric, moody, dark fantasy. Excuse me, I meant: Hell noir.