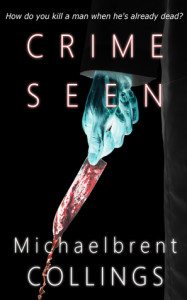 Detective Evan White is on the trail of his wife’s killer. With his partner Angela, he’s faced with the seemingly impossible task of catching a man who seems impervious to bullets, who seems in fact to be dead already. All the while the killer is taunting Evan, dropping hints and leaving a trail of violence in his wake.

Paced too slowly to be a thriller (until the climax), this novel fits squarely into the mystery genre. As far as mysteries go it’s fairly straightforward. The plot never gets hampered down with too many tangents or red herrings. The problem here is that so much of the writing isn’t plot. Right from the outset, sentences are often followed by others that say the same thing with different words. It’s possibly meant to give extra impact, but comes across as a means to pad out what would have worked much better as a shorter work. Add to this some clumsy similes and sporadic paragraphs that seem no more than thinly-veiled, pseudo-philosophical monologues, and the reader’s interest will likely wane long before the denouement.

There is a decent story under all of this, and the characters are endearing enough (if not quite as fleshed out as they could be). The descriptive passages are effective, if overlong, and there’s always a strong sense of place. For a novel that deals so much with emotions like grief and fear, though, there are a lot of constituent parts that need to come together well enough to back these things up, to form that indefinable connection with the reader. Crime Seen, unfortunately, doesn’t measure up in this regard.

As a novella, Crime Seen could have been a tight, atmospheric story with a nice twist at the end (this is one thing it does have). As it stands, there are many other novels out there with similar themes and better execution. All but the most easily satisfied of mystery fans would do well to give this one a pass.