The all-original anthology Queen Victoria’s Book of Spells by the editing duo of Ellen Datlow and Terri Windling is coming early next year. The theme is Gaslamp Fantasy, which falls along the lines of Steampunk only with more of a focus on magic instead of tech.

The line-up looks quite impressive as does the cover.

Queen Victoria’s Book of Spells will be released in March from Tor simultaneously in both hardcover and trade paperback. Another noteworthy anthology coming this October from Datlow and Windling is After comprised of all-original dystopian/apocalyptic stories. 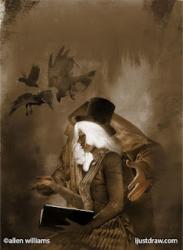