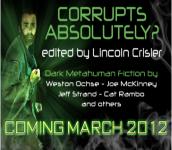 “Modern pop-culture is brimming over with stories of bright, polished men and women with iron wills and indestructible moral codes, who throw themselves into a life of public service after being graced (or cursed) with cosmic powers, a magic ring, puberty-activated mutant genes or obot suits,” Crisler says on the anthology’s website. “What would really happen if today’s people had superpowers?”

Events organized around the anthology’s release include a March 30th launch party at the 2012 World Horror Convention in Salt Lake City, Utah, virtual panels of anthology contributors hosted on the editor’s website and an Augusta, Georgia signing at a location and time to be determined.

Lincoln Crisler is the author of two short story collections and one novella. His work has appeared in a variety of print and online publications, to include HUB Magazine, Shroud Publishing’s Abominations anthology and IDW’s forthcoming Robots vs. Zombies anthology. A United States Army combat veteran and non-commissioned officer, Lincoln lives in Augusta, Georgia with his wife and two of his three children.