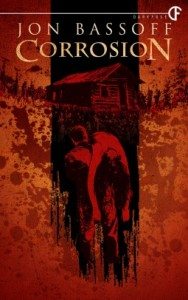 Independent press DarkFuse classifies Corrosion as a psycho-noir. It’s a term that’s starting to turn up more frequently lately, and even its fans seem to disagree on exactly what it means. All noir fiction is dark, harsh, and psychological by its very nature. The entirety of Jim Thompson’s The Killer Inside Me (1952) or the shocking ending to Lawrence Block’s Grifter’s Game (1962) are as disturbing today as they were when they were twenty-five cent paperbacks. So, what exactly puts the psycho in psycho-noir? The short answer: the fact that things may not be as they seem. If you’d like a longer explanation of psycho-noir, it’s between the covers of Jon Bassoff’s debut novel.

Corrosion begins as Joseph Downs, a war veteran with a hideous, burn-scarred face, finds himself stuck temporarily in a decrepit mountain town. After he gets into a bar fight defending a woman from abuse, she turns up at his rooming-house door. Lilith is about as unappealing as they come—filthy, repulsive, and trampy—but mere moments after they talk in his room, our protagonist makes an alarmingly quick emotional leap.

She moved closer on the bed. Her face was in soft focus. Pimpled skin. Bloodshot eyes. Lovely, no. But I was in love. It happens too easily for me.

This is no love-at-first-sight Nicholas Sparks moment, but the first sign that something here is broken. There’s more screwed up about Joseph Downs than just his face. His instant attraction to Lilith is only the beginning of what becomes a nightmare of violence, secrets, crime, and passion. As the mysteries of Downs’ past are revealed, the story doesn’t fall into place so much as it becomes more and more unsettling. Evil has very deep roots, and the further down they go—the further into the past—the more horrific the revelations. Perhaps most disturbing of all is the realization that such an abnormal past can’t help but imprint on the present. Just as with traditional noir, where losers lose, lose again, then lose some more, in Corrosion, it’s obvious that nothing good can come of this.

Bassoff has been called a cross between Jim Thompson and David Lynch. It’s too bad that Lynch’s name has become hip shorthand for “weird” (a few decades ago, anything weird was compared to Fellini), when there are so few works that are actually similar. In this case, though, there may be some truth to the comparison, as there is something Lynchian at work here. It’s the small-town vibe, populated by minor characters stranger than you’ll find in any big city. It’s the timelessness that makes you question whether this is the ‘50s or today. And it’s the dark secrets that lurk beneath the mundane, imbuing ordinary things with an eeriness. Though the town lies somewhere in Oklahoma, there’s also an element of the Southern Gothic that’s hard to ignore, reminiscent of Flannery O’Connor’s The Violent Bear It Away.

Despite the violence and the depravity, if you look at it just the right way, Corrosion could almost be a love story—several of them in fact. Bassoff shows us multiple times: this is what love looks like to the damaged.