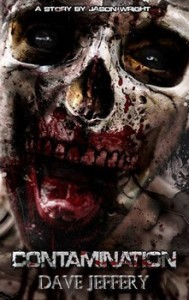 Given the massive influx of new zombie books and films in the last fifteen years or so, it’s really hard to write a zombie novel that has something original to say.  After a few pages into CONTAMINATION, I thought Dave Jeffery might have really been on to something here, but it quickly became clear that this isn’t really even a zombie apocalypse story as such.

CONTAMINATON opens with alcoholic journalist Dean Sharp waking up in his apartment after a rough night of drinking to find that over night civilization has collapsed and zombies have taken over.  (As beginnings go, it’s not bad, though certainly similar to the opening of 28 DAYS LATER.  I’m skeptical that a full-blown zombie apocalypse could take place in a single night, but hey, I’m reading a zombie novel, so I’m willing to suspend my disbelief.)  Dean’s a seriously flawed guy – he’s a raging alcoholic after all, and one who needs to consume truly heroic amounts of alcohol, especially when he’s under stress – but he has a genuine will to live, so he’s a good protagonist for a zombie apocalypse novel.  He’s also plagued by the nagging voice of his estranged sister Jenna, who he imagines hectoring him about all of his decisions (that sounds annoying and intrusive but it’s actually fairly amusing).

After a pretty darn good opening sequence (the first 24 pages), the narrative abruptly shifts to a flashback that took place ten years to the start of the zombie apocalypse when Dean traveled to a small village where a young girl was kidnapped and presumed murdered.  This seems a straightforward – if initially out of place – plot divergence, but then it becomes clear that things have taken a decidedly weird turn when Dean discovers the hidden lair of a mad scientist (complete with a secret door built into the side of a cliff) who has been creating canine-human hybrids.  I won’t spoiler you on what happens here, except to say that obviously Dean survives, though many others do not.  But here’s my first criticism of this section: someone stuck a 72-page short about mad science involving killer wolf- or dog-men going awry inside a zombie apocalypse novel!  And keep in mind that this is a relatively short novel to begin with!  After that “interlude”/backstory, we return to Dean’s more recent past, when we learn that he had been investigating one of those evil mega-corporations with unscrupulous business practices.  The twist here is that the zombie outbreak may have been brought about by the corporation’s use of inadequately tested genetically-modified organisms (GMOs) in their food products.  I expect that the more the public learns about GMOs, specifically those found in so much of our food today, that we’ll see more horror stories concerning them, so I thought this was an interesting twist.  (Regarding the origin of the apocalypse, I was reminded of David Wellington’s Monster trilogy in which the world is also inadvertently destroyed by a scientist seeking a cure for an illness.)

But then we reach the final section of the novel, which tries to link all these seemingly disparate threads together and ends up just adding more and more fantastical elements as explanation until the whole thing becomes muddled and really strains the story’s credibility.  I won’t spoil the exact ending for you, but I must confess that I found it unsatisfying.  CONTAMINATION is not a bad novel, but the reader needs to understand that this is not at all a traditional zombie novel as it is being billed.  The cover description and promotional materials in no way suggest that a non-zombie story has been placed inside what is portrayed as a routine zombie novel.

Ultimately, while I enjoyed significant parts of CONTAMINATION, I can’t recommend it without some serious reservations.  Frankly, there’s just too much going on in this short novel.  What seems to begin as a “simple” zombie apocalypse novel quickly morphs into a tale of mad science gone awry.  The zombie bit gets lost in the shuffle after the first few chapters, then it becomes a story about a mad scientist who creates murderous wolf-humanoids, then it becomes a story about an evil corporation (perhaps inadvertently, or uncaringly) collapsing society via GMOs in the food supply, then it becomes a story about memory tampering and an evil little girl who grows up to have psychic powers.  Any one of these concepts could have been a great premise for a novel.  All of them jammed into a single brief novel was just too much for me.  Having said that, Dave Jeffery is writes very clear prose and he’s certainly not short of interesting ideas, so I look forward to his next work.