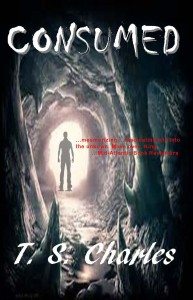 Consumed
T.S. Charles
W & B Publishers Inc.
March 5th, 2014
Reviewed by Catherine Bader
Zack Treadwell was five years old when his parents were attacked and killed by a group of – what? Zombie like creatures? People who were no longer human? Zack saw what happened and could not convince anyone that they were real.

T.S. Charles’ characters burst from the pages in a coming of age tale that takes you through Zack’s life as he moves from one foster home to another over the years. Then he comes to Stone Creek, West Virginia to attend the local high school. And the real story begins.

One of his new friends has a secret and as their friendship grows, that secret finally comes out. Nick Tinderson keeps a binder filled with news clippings of strange events and bizarre happenings. The murder of Zack’s parents is one of them.

Then Nick tells him of a place in the woods where there is a vault door covered by brush. On several occasions he has seen a helicopter drop off some seriously messed up people who look an awful like the people who killed his parents.

From there the book explodes into their plans to get inside somehow and tell the world about it. Secretly, the two boys find their way in…..

The prose is explosive as the boys experience the horrors within and try to find their way out. The true terror in that place will come to you in bloody, tattered, unfettered ways and leave you truly frightened.

This is a finely tuned, intensely scary, well written horror book. The ending will haunt you.