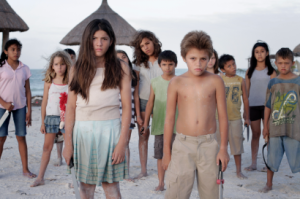 New Video has shared the official trailer for COME OUT AND PLAY, a new horror film directed by Belarus-born filmmaker Makinov. In the terrifying new production, based Juan José Plan’s 1976 Spanish horror classic, El Juego De Niños a young couple’s peaceful vacation turns into a struggle for survival as they realize the island is filled with murderous children.

Watch the official trailer on Apple: http://trailers.apple.com/trailers/independent/comeoutandplay/
COME OUT AND PLAY opens in select theaters on March 22nd and is currently available on iTunes and VOD.

Starring:
Ebon Moss-Bachrach, Vinessa Shaw, Daniel Gimenez Cacho
Synopsis:
In COME OUT AND PLAY, Beth (Vinessa Shaw, 3:10 To Yuma) and Francis (Ebon Moss-Bachrach, Damages), a happy young couple expecting their first child, have come to Mexico for a romantic getaway. Francis insists on venturing by boat to a more serene locale, Beth hesitantly agrees. As they dock on a sun-kissed beach where children are playing and giggling, everything seems perfect at first. But as they wander the strangely empty streets, an atmosphere of unease sets in: an abandoned hotel, a distress call that repeatedly echoes from a radio set, the sense of being watched…the sound of children’s laughter drifting through the streets, but no adults in sight. When Francis witnesses the violent death of an old man (Daniel Giménez Cacho, Bad Education) at the hands of a smiling little girl, a day in paradise quickly turns into a struggle for survival. Francis must protect his very pregnant wife from a pack of murderous children and get the couple off the island alive. An unsettling theme drives the starkly simple plot of COME OUT AND PLAY, Belarus-born filmmaker Makinov’s horror production based on Juan José Plan’s 1976 Spanish horror classic, El Juego De Niños.