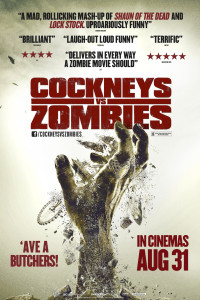 From the land that gave the world the wonderfully wicked and uproarious Shaun of the Dead comes this latest zombie comedy in a long line of zomcoms. Can the Brits strike gold a second time, or is this flick like so many movies (not to mention video games, novels, comic books, TV shows, hell, TV commercials for that matter) these days and just trying to jump on the ‘we love zombies’ bandwagon by shoehorning the cavorting corpses into any old thing? Well grab a gun and your Cockney rhyming slang to English to American dictionaries, because we’re heading off to London’s East End to do battle with the undead.

The movie begins with a construction crew unearthing a tomb sealed from the sixteen hundreds by order of the king. A couple of guys go in looking for loot to plunder but find only skeletal man-eaters instead. So we have our patients zero and I liked the whole ancient evil awakened angle. Moving on. The movie is split pretty evenly between a group of youngish reprobates headed up by a pair of brothers looking to do some Robin Hooding by knocking over the local bank. Team two is a group of elderly people soon to be kicked out of their homes, led by a favorite old tough guy of mine, Alan Ford (who was Brick Top from Snatch) who’s the grandfather of the two brothers and is a bit disappointed in their criminal ways.

Into this family drama a whole horde of zombies eventually shamble, and if I have any complaint with this movie is that word ‘eventually.’ The crime caper takes up a bit too much time here, and it’s pretty much crib notes from the early Guy Ritchie playbook. Now it’s not a bad thing, in fact it’s quite good here, but that’s not what people who went to a movie called Cockney’s Vs. Zombies came to see. So I just wish the big zombie smack down showed up sooner than it did here. That being said, once it starts, it brings the goods and then some.

The zombie part of this zomedy is handled pretty well, with my preferred type of flesh eaters being featured: the slow, shuffling type of walking dead. Also the gore is surprisingly good and at times plentiful here…when it’s not CGI bullet hits. Thankfully those cinematic abominations are used only sparingly, but when they do show up, they just look awful, especially when seen side by side with such good looking practical makeup effects. Yeah it’s a minor thing, but it is a pet peeve of mine and really, there’s no excuse to use them. What, did moviemakers just forget how to make squibs ever since Jurassic Park came out?

Thankfully the comedy part of this zomedy movie is rock solid and then some. I laughed a lot while watching this film. I loved the zombie soccer hooligan brawl. I loved the idea of a zombie with a steel plate in its head. I loved the most epic of all chases between a slow, shuffling old man with a walker and a slow shuffling zombie. If you come to Cockney’s Vs. Zombies looking for the funny, you will find plenty of it waiting for you here. Since that is exactly why I watched this flick, I can easily recommend it to anyone looking for a spiritual successor to Shaun of the Dead. It’s not as wacky as that previous movie, but it is bloody good fun.