A new signed limited collector’s edition of Clive Barker’s “The Midnight Meat Train” is being published by Dark Regions Press and will be offered for preorder on Tuesday, March 25th exclusively on DarkRegions.com at: http://www.darkregions.com/books/clive-barkers-the-midnight-meat-train-special-definitive-edition

All three hardcover editions feature up to 9 paintings as interior artworks, a newly written afterword and are signed by author Clive Barker. All editions feature a newly written introduction by Phil and Sarah Stokes, a new foreword by screenplay writer Jeff Buhler and multiple photos and other never before seen materials. The first complete commercial printing of the official movie script from the major motion picture starring Bradley Cooper directed by Ryuhei Kitamura released in 2008 will be included in all hardcover editions. 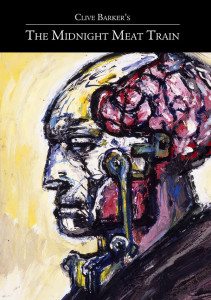 In 1984 the Books of Blood by Clive Barker were published and quickly gained a following worldwide. Literary eminences like Stephen King noticed early on the creativity and powerful prose throughout the Books of Blood, bringing Clive Barker’s stories to the forefront of horror fiction. One of these stories was “The Midnight Meat Train” following one Leon Kaufman as he discovers the origins of a series of grizzly subway train murders in New York City… and the controlling forces behind it all.

Clive Barker’s The Midnight Meat Train Special Definitive Edition brings the original story back with all-new material: a new afterword written by Clive Barker, 9 color paintings based on the story by the author, a new introduction by Phil & Sarah Stokes, a foreword by the movie screenplay writer Jeff Buhler, the first complete commercial printing of the movie screenplay, never-before-seen photos, notes, sketches and more.

The Midnight Meat Train Special Definitive Edition is currently offered for preorder in three signed limited edition hardcover formats and is expected to be in stock by summer of 2014. These collector’s editions are expected to sell out extremely fast. The ultra-deluxe traycased hardcover may take longer to ship than the other editions due to the book being carefully handcrafted with premium materials.

This is the first and only printing of this special comprehensive signed hardcover edition. Reserve your copy of this definitive collector’s edition of one of Clive Barker’s classic and most celebrated stories: “The Midnight Meat Train.” 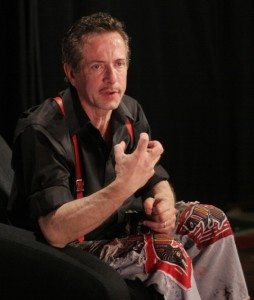 Clive Barker was born in Liverpool, England, at 1:00 am on the morning of 5 October 1952. He grew up there and went to Dovedale and Quarry Bank schools – the same schools that John Lennon of the Beatles had been to a few years before Clive! He then studied English and Philosophy at Liverpool University.

Whilst at school he wrote – stories, comic strips and plays – and together with his friends formed a fringe theatre group which mounted productions both in Liverpool and, later, in London.

His first books, The Books of Blood, were published in 1984 in England and Clive began to concentrate on writing fiction rather than plays. Publishing both short stories and novels for adults, he moved to Beverly Hills in Los Angeles in 1991 where he next wrote his first published book for ‘all ages’ – The Thief of Always.

Clive has directed and produced films, written for television and exhibited his paintings in Los Angeles, Chicago and New York, as well as working on comics, models, video games and toys.

The first volume of the Abarat series was published in 2002 and made the New York Times’ bestseller lists, as well as winning a number of awards. Abarat II followed in 2004, winning a Bram Stoker award, with volume three – Absolute Midnight – released in September 2011. – See more at: http://www.darkregions.com/clive-barkers-the-midnight-meat-train-special-definitive-edition/#sthash.V8uso7im.dpuf