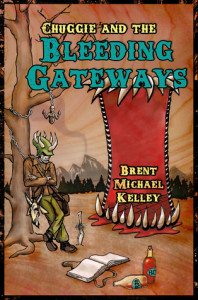 Chuggie and the Bleeding Gateways

Brent Michael Kelly’s unlikely antihero returns in Chuggie and the Bleeding Gateways. The story picks up in the immediate aftermath of Chuggie and the Desecration of Stagwater, which ended with the release of a powerful demon and the violent destruction of that corrupt city. Chuggie resumes his adventure in the wilderness outside the ruined city, quite literally surrounded by the ghosts of his past. From there, he meanders aimlessly, half-heartedly tries to learn more about the strange magical artifacts he has collected, and stumbles into dangerous conspiracies. Eventually he is provoked into unleashing his violent side once more.

This installment feels transitional. A series of characters take the narrative helm in interwoven chapters, and their paths slowly converge in the aftermath of the Desecration.  Most of the characters are familiar from the previous book, and several have expanding roles. Although it does build to a climax and resolves some of the immediate concerns of the characters, it feels like it is setting the stage for something larger. Strangely, the demon that destroyed Stagwater is conspicuously absent despite the closeness in time and space of the events in the two books. Some of the broad world-building that was hinted at in the first book is revealed, but inconsistently so. Bits seem to leak out, but other elements remain opaque. Two books in, and I’m still not sure I really understand the bigger picture. Leaving so much unexplained might contribute to the overall sense of chaos and dangerousness of the environment, but I wonder if a little more direct exposition would help. Likewise, I would not recommend entering the series with the second volume; it’s best to start this at the beginning.

Chuggie remains dim, impulsive, and crude. Although he has some guilt over the destruction in his wake and concern for innocent lives, his actions frequently create more harm than good. He serves as both comic relief in a horror-strewn world, and as a source of some of that world’s horror. The setting of Mag Mell is filled with tormented and depraved beings, bizarre magic, and considerable violence. It highlights the challenge of this kind of story: Chuggie looks like a good guy compared to the really twisted evils that surround him, but he is still a boorish, violent drunk. His arrival does not really bode well for those around him, good or evil. It is challenging to sustain goodwill for such a grotesque protagonist. As with most drunks, he is not as funny and charming as he thinks he is, and it may be that a little Chuggie goes a long way for some readers.

Like Chuggie, the book wanders a bit erratically. As a wholly unreliable narrator, he often has no idea what’s going on around him, and the reader doesn’t necessarily know either. And, like the protagonist, the writing is rough around the edges.  The prose is less polished than the first book in the series, and another round of proofing and editing might have been in order. It may be that this style is what suits Chuggie best, as it parallels his character. Despite the flaws, there is something very direct and authentic about Chuggie and his story that I find appealing. It is a strange world, darkly comic at times, and always messed up. Kelly has a particular imaginative vision and the story is true to it.

Gods of Mag Mell preserve me (although that would be a futile prayer, indeed), I’ll be waiting for the next visit from Chuggie and his companions. I can’t really say who is going to respond to this book. The strengths remain the unique gonzo weirdness of world and an antihero interesting enough that you can overlook the warts in his character and the text.  I’m not usually very forgiving when it comes to the technical aspects of writing but somehow I find that I am where Chuggie is concerned. At Chuggie’s core is a basic existential strategy: He doesn’t overthink anything, doesn’t expect it all to make sense, doesn’t look for any higher meaning. A bag full of Hell that drives people insane? Sure, why not? Time travel? If you say so. Aliens? Bring it. He takes it all at face value. His inability to explain anything is there again and again. No matter how confused, drunk, and ignorant he is, no matter how unfair, cruel, and malignant the universe and the people he encounters are, he presses on, just doing the best he can.  Somehow, Chuggie and the traumatized lunatics that populate this bizarre world manage to find others that they view with genuine affection and cobble together families in the middle of all the madness.

And that ain’t bad.