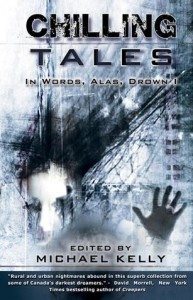 Nightmares can come in any form and take any shape, and in this anthology are twenty tales of terror. There is creeping dread too as Editor Michael Kelly has had his work published in many top magazines and publications in the US and UK respectively, so it is only fitting that he gathers this collection of macabre tales. David Nickle, Simon Stranzas, Ian Rogers, Robert J. Wiersen, Rio Youers, Bev Vincent and Michael Matheson have all entered their stories into this horror and dark fantasy anthology.

The cover is ambiguous with what I notice are moody dreamscapes of a face and a bound man near a block of flats, but that is so typical of John Kaiine’s graphic style.

Michael Kelly introduces the anthology “Breathing Fresh Life Into New Monsters,” saying this is the second in the Chilling Tales anthology series. “Evil Did I Dwell, Lewd I Did Live,” contained stories from Leah Bobet and David Nickel, regulars who feature in this volume as well. When a volume of horror stories has been a success, it is not unusual that there would be a sequel. “Chilling Tales: In Words, Alas, Drown I,” is a volume of unsettling dark fiction written by Canadian authors. The point of this series is that there are many anthologies out there with the general range of monsters; vampires, werewolves, zombies, and sometimes, though rarely, mummies. Michael wanted to include a different set of stories about the sort of monsters that lurk in our minds, ones that come to us when we are in the dark with no name. They are original and range from a get together that goes wrong, a man with intense sleep problems, a man who falls for the girl next door, but shouldn’t, a girl who gets to leave a sanatorium for a day, and a woman who avoids other people as she can see their wasted potential, even if they haven’t met before.

When so many anthologies are around that are similar in nature, it is refreshing to have one like this full of original stories that are just as good as you can imagine. Here you won’t find the ordinary monsters an older readership will have grown up with, this is a new breed of monsters readers will either love or hate, just one thing is certain, they are well compiled with a thought for the readers who will spend time and money on a new anthology. I enjoyed some of the stories, not all, but would recommend it to readers who like altogether different urban horror stories when they are in the mood.