Check Out Your Oculus Scary Selfie

Visit SeeYourEvil.com on your mobile browser, where you’ll be prompted to take a photo to receive a terrifying OCULUS mirror output version of yourself. The scary selfie can be uploaded directly to Facebook, Twitter or Tumblr right from your phone. 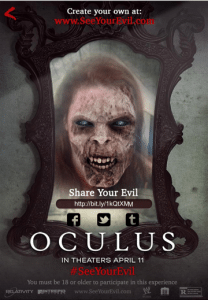