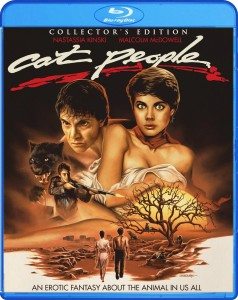 A very young and lithe Nastassja Kinski plays Irena who goes to New Orleans to meet her brother, a man she has never met. Her brother, Paul, is played to creepy perfection by Malcolm McDowell and it soon becomes clear that Paul is hiding something. Something other than his incestuous desirers for his attractive sister. There is a prostitute-attacking black panther on the loose in the Crescent City and somehow it is mixed in with Paul and Irena. This becomes more evident when Paul ups and disappears one night.

Enter John Heard and Annette O’Toole as big cat experts from the local zoo who not only capture the renegade panther, but all too soon John’s character soon becomes smitten with Irena. Unfortunately for all involved, Irena is a lot like her brother. When she gets turned on, well let’s just say that she gets wild. Really, really wild. What, did you think this movie was called Cat People for nothing?

This new Blu-ray from Scream Factory first and foremost looks amazing. Additionally, there are a bunch of interviews with the cast and crew on here that comprise most of the release’s special features. There are seven interviews, to be exact, and they feature actors Nastassja Kinski, Malcolm McDowell, John Heard, Annette O’Toole, Lynn Lowry, composer Giorigo Moroder, and writer/director Paul Schrader. While all the interviews are rather short, ranging from six to nine minutes in length, all together they equal nearly 50 minutes. In addition to the interviews there is a trailer, TV spots, photo gallery, and a collection of posters and production art.