Castle by the Sea (What Waits in the Shadows) 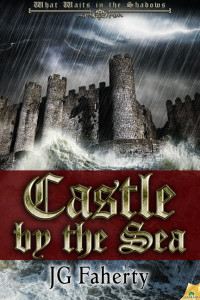 I love the sort of story that, in another age, could begin with ‘it was a dark and stormy night’ and really mean it was dark and stormy. In JG Faherty’s new novella, Castle by the Sea, we have dark, stormy, dreary, and dreadful wrapped up in a haunting, suspense-laden narrative.

Jason and Erika are out for a night of fun at a carnival that’s just hit town. Lights, food, games, and the alluring Tunnel of Love seduce the young couple through the gates. In the dark depths of the watery tunnel, something happens. Their normal world falls away, and the pair finds themselves on a macabre island with a castle, fog, and horrific nightmares.

Like a well-crafted Henry James story, Castles by the Sea builds slowly. The tension crawls across the pages, and the horrors lurk just beyond the corner of your eye. Faherty skillfully uses a developing storm to parallel the growing fear inside the mysterious castle, and the effect is chilling.  In a delicate balance between reality and insanity, Faherty tricks his protagonists into that terrifying place of doubt. Does Jason see a withered corpse, or do his eyes see what his mind, tortured from sheer terror, has conjured? A merry tune jangles ominously in the fog, but is it real? Faherty manipulates time and space to create an ever-increasing feeling of dread and suspense as the story builds to a terrible climax.

If Castle by the Sea has any fault, it is in length. The narrative is well-constructed and compelling. As a full-length novel, Faherty could have given us more on the characters, particularly the mysterious Osvald. His motivations are complex, thus making him more than a black-and-white, flat bad guy. In spite of the nightmares he and his girlfriend endure, even Jason sympathizes with him, if only for a moment. I wanted to know more about him, but length restricted his development. The second couple, Burns and Lilly, could have been more fleshed out more as well. Again, a longer work would have allowed the characters more room.

These are minor flaws in an excellent work, however. Faherty’s descriptive writing lures you down bizarre paths with terrifying twists and turns. Using suspense rather than gore and violence, he weaves a nightmarish narrative that you will not soon forget.