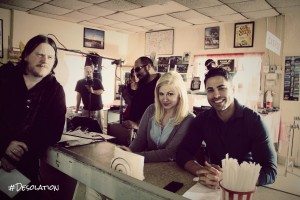 Desolation is directed and written by award-winning filmmaker Ryan M. Andrews. The plot of the film is as follows: Along the back roads of America, a hitchhiker is waiting. Gorgeous, mysterious and full of sadistic rage, what chances do an unsuspecting couple have against her? 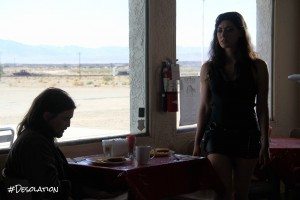 The movie also stars Tristan Risk (American Mary) and Jessica Cameron (Truth or Dare). Mendez is playing the role of “Salvador” opposite Jessica Cameron who plays his wife “Heidi” in the feature film. He is the brother of actress Eva Mendes (2 Fast 2 Furious, We Own The Night).

The feature film Desolation is one of three features included in the ambitious, first of its kind project. A group of indie filmmakers packed into an RV and are filming 3 movies while traveling across the United States. The other project, being directed by Jessica Cameron is titled MANIA, from a script written by Jonathan Scott Higgins. The 3rd movie is a feature-length making of documentary aptly titled Kill the Production Assistant. It chronicles the production of these two films to give viewers an inside look at independent filmmaking at its finest. 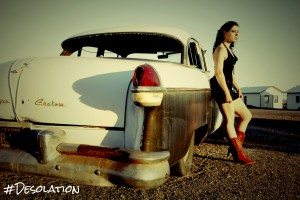 The group of filmmakers have already begun shooting and have filmed in California, Nevada, & New Mexico. To find out more about the project and where they are headed next, please visit their website at: www.killtheproductionassistant.com.

The filmmakers were kind enough to pass along the first stills from the many sets of Desolation. More information about each film can be found at the social media links below:

Directed by: Ryan M. Andrews
Written by: Ryan M. Andrews
Starring: Tristan Risk, Jessica Cameron, & Carlo Mendez.
Tagline: She’s been waiting for you
Synopsis: Along the back roads of America, a hitchhiker is waiting. Gorgeous, mysterious and full of sadistic rage, what chances do an unsuspecting couple have against her?
Social Media:
Facebook: https://www.facebook.com/DesolationtheMovie
Twitter: https://twitter.com/DesolationMovie

Directed by: Aaron Lane
Synopsis: A feature-length making-of documentary, chronicling the travels and filming of MANIA and Desolation. This is a chance for audiences to see a grassroots approach to independent filmmaking.
Social Media:
Facebook: https://www.facebook.com/KillThePA
Twitter: https://twitter.com/KillThePAdoc