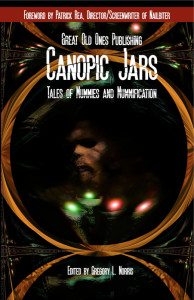 Canopic Jars is a collection of thirty short stories featuring the process and mythos of mummification.  I do enjoy the mummy as an element in horror, and I rarely see it used in print. I think this is because authors don’t typically see mummies as creatures that inspire fear. They groan piteously and they don’t move quickly, so what’s to be afraid of? At least in movies, The Mummy (1999) series brought a fresh vision of the mummy back to the screen after its first appearance in classic films with Karloff and Cheney.

That changes with this anthology.  The stories chosen were varied; don’t think that all of them are based in (or on) Egypt.  As much as I love ancient Egyptian lore and mythology, I enjoyed the different interpretations of mummification and the uses of canopic jars.

Standouts for me were:

Two daughters are faced with a gut wrenching decision regarding their mother, who is horrifically burned and on life support, waiting for her fate. Of course, the women disagree:  one is devoted to her mother, the other is there out of obligation and is uncomfortable.

The story is descriptive, full of language on how fire consumes flesh, how burned skin chars and comes away after sticking briefly to a daughter’s loving touch, revealing the underneath.

Bailey is also able to effectively carry the fire imagery throughout the tale. One of the most potent lines for me was: “We argue until we’re no longer sisters.” Also potent?  The last line. But I won’t mention it here because it needs to be read as the author intended.

Lucas is fresh out of jail for one crime and ready to start his life over again when he discovers that his longtime friend needs his help. He still carries a torch for her, but is he willing to commit crime number two? Maybe he won’t have to. Maybe the house he’s just purchased will do it for him.

The setting for this story is well described, blending in with the short flashes we get of Lucas’s past. Schoonover has a gift for dialogue and the conversations have a realistic feel.

Sometimes foodies take it a bit too far. Such is the case here, where an Egyptian princess’s mummified remains are served as appetizers at an exclusive party. While aromatic spices were used in preserving bodies in Ancient Egypt, Queen Nepathera doesn’t appreciate being an hors d’oeuvere.

This grotesque display of wealth and privilege is made disturbingly probable in Norris’s capable hands.

While there were a few stories that could have had stronger endings, Canopic Jars is a great read that brings history over to play with horror. The fresh looks at mummification found here could perhaps return the mummy to its rightful place as something to fear.