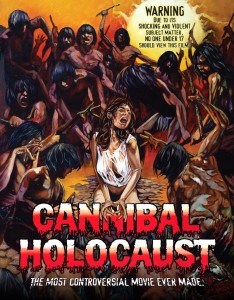 Yes, it’s that movie. You know it, even if you’ve never seen it. If you’re a horror fan of any kind, you’ve at least heard of this one, and for good reason. There are a few films that are really notorious, far less than what a lot of horror films would claim. This is one of them. This is the reason there were so many movies is the early 80s with the word “cannibal” in them. This is the movie Eli Roth will be paying homage to (or ripping of) with his upcoming The Green Inferno. It is also one of the first in a trend that has all but taken over modern horror movies: a found footage film. So it also gets points for being a trail blazer. But is it really that good of a film? Reputation and historical kudos aside, is it worth picking up this brand new, deluxe edition Blu-ray of this infamous film? Well let’s find out, but be warned, it won’t be an easy ride.

But first a WARNING: one of the things that makes this movie so notorious was the inclusion of footage of real live animals being killed. Now the director tried to defend his reprehensible decision by saying that the animals killed were eaten by the tribe of natives that did it, and therefore it was okay. However many believe that there is no reason to ever kill animals for the sake of a movie, and I am one of them. So do those scenes stop me from watching this film? No, I just skip them, but some folks have condemned this movie because of their inclusion and I can’t balm them. Thankfully, the kind folks over at Grindhouse Releasing recognize this, and so there is both the original theatrical version and the animal cruelty-free version on this disc. For the record, it’s that second version I watched for this review. Okay, on with the show.

A team of documentarians trekked into the Amazon rainforest to film a little-known, whispered-about tribe of cannibals, and promptly vanished. A New York anthropologist then goes to the same jungle, looking for the lost film crew, and after running into a various groups of natives, finds the reels of film that they shot. It is upon bringing this footage back to the States and viewing it, that the true horrors that befell the filmmakers are known. Not only that, but some behind the scenes bits show that the “civilized” filmmakers might have not been the innocent victims that we were lead to believe.

Pretty much, that’s all there is for the story. Some dumb people go where they shouldn’t, meet and mess with some people that they shouldn’t, and are then butchered, eaten, and turned into native poo. Yeah, that’s a nice image, I know, but that’s what happens when you’re eaten. But what makes this move so memorable, other than the infamous animal deaths, are the many fake but effective scenes of torture, sadism, and death. No joke, folks, this is some pretty hard stuff, so know that before sitting down to watch this flick for family movie night.

So as another warning, here are some of the gore-tastic highlights that can be found in Cannibal Holocaust. Feel free to skip this paragraph if you want. Here you can see a native punishment for infidelity where a woman is raped by a large stone phallus, has a ball of mud and sharp sticks shoved up inside her, her head bashed in, and then pushed into the river for the crocodiles to eat. Still with me? Okay, let’s move on. There are amputations, castrations, various guttings, rapes, a nightmarish birthing scene followed by the woman being stoned to death, and the most memorable impalement ever put to film. And oh yeah, tons of nudity (for those that worry about that for some reason), of both the male and female variety, so yay for equal opportunity.

Now there is a bit more to this movie than just a collection of horrible atrocities. There is a message hidden somewhere deep in the shock and gore about the nature of civilized and primitive man and the thin line that separates them. But make no mistake, this is gore flick through and through. If you are a gorehound, then you can start baying now, because the cannibal carnage never looked as good as it does here. If this is not your kind of film, then do yourself a favor and stay the hell away from it.

Befitting a movie as infamous (or at least, as named-dropped) as Cannibal Holocaust, the new Blu-ray from Grindhouse Releasing comes with some pretty cool extras. There is an audio commentary with director Ruggero Deodato and actor Robert Kerman. There is a second commentary with actors Carl Yorke and Francesca Ciardi. There is a new stereo re-mix main soundtrack, as well as the mono original. There is an alternate scene of “The Last Road to Hell” the movie within this movie, and boat load of trailers from around the world. And you know what, that’s just what’s on the first Blu-ray. Yep, this is a two-disc set, and the second one comes loaded with more goodies. There are seven individual “interviews” (the quotes are because some of these are full-blown featuers) with pretty much anyone that was involved with this movie that’s still alive and all together, they run over four hours long. There are two different Q&A panels that combined runs over 40 minutes. There are also two reunions caught on tape, where actors Yorke and Kerman meet up with director Dedato for the first time in about 20 years, that together run about 19 minutes. There are also nine, couth them, NINE extensive still galleries and 15 trailers for other weird movies put out by Grindhouse Releasing. Oh and not to mention a few cool Easter eggs sprinkled throughout, but I’ll leave you to discover them for yourself. What, you still want more? Okay, how about a 24 page, full-color collector’s booklet and a newly remastered soundtrack on CD?

Love or hate Cannibal Holocaust, you can’t deny that it was hugely influential on the movies that followed it, or the young filmmakers that saw it as kids, and would later grow up to make their own horror movies. Likewise, you can’t deny that this is a great Blu-ray collection, one that any movie, horror or not, would be lucky to have. Lord help me, but I do like this movie, warts and all, and so I will recommend it, but only for a very select audience. Hopefully by now, you know if you are part of that audience or not.