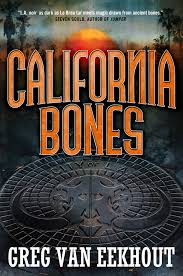 California Bones
Greg van Eekhout
Tor Books
ISBN 978-0765328557
June, 2014, $24.99 HB, $14.99 PB, $10.67 Kindle
Reviewed by David T. Wilbanks
When Daniel Blackland’s osteomancer father gives him his first lesson in the pain and power of bone magic, it’s clear from the start that California Bones by Greg van Eekhout will delve into the deep waters of the fantastic. Later in the novel, years after the traumatizing assassination of his father, we find that Daniel, in order to make ends meet in the deadly city of Los Angeles (in the Kingdom of Southern California), has turned to a life of thievery. Gifted with powers derived from the bones of various ancient and powerful creatures, Daniel has become a super-thief, his abilities aiding him in his chosen profession. The story proper begins when Daniel’s boss Otis gives him a dangerous assignment: along with some talented and trusted friends, he must sneak into a nigh impregnable ossuary and steal back the magic sword created by his father years before–and they must steal this weapon from the dreaded Hierarch, ruler of the kingdom, and the same osteomancer who had ordered, and participated, in the murder of Daniel’s father.

Eekhout’s dark urban fantasy novel really worked for me. The characters are fun, the plot really moves and the story is not overly long which is what I like in this genre. Essentially, California Bones is a heist novel that takes place in a world of magic, and over the centuries this magic has permeated every aspect of life just as it has soaked into Daniel’s very bones. The alternate history of this world is woven seamlessly into the narrative so that the story never gets bogged down in backstory, and besides, it’s a great idea that works. If you’re wondering if it’s scary enough for a horror reader, there are plenty of dark and dangerous characters doing terrible things to their victims without a hint of remorse.

This novel really has something for everyone, whether they like urban fantasy, dark fantasy, crime or even superhero books (many of the characters have some sort of power). It’s a winner through and through, and I’m hoping there will be a sequel.