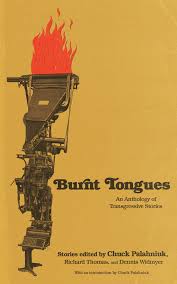 A quick online search for “transgressive” defines it as something “involving a violation of accepted or imposed boundaries, especially those of social acceptability ”. With this intent in mind, it could be argued that a collection of transgressive fiction runs the risk of doing this at the expense of story. Luckily this isn’t the case with Burnt Tongues. Many of the 20 pieces offered here deal with subjects that are generally outside the comfort zone of most mainstream fiction, if not things that are outright taboo. Without exception each one is well-written and, above all, unflinchingly honest about whatever is being explored. The stories aren’t merely about the shock factor, though you’re unlikely to come out unscathed after reading them. They take the things we may not even want think about and push them into the spotlight, revealing all.

Chuck Palahniuk gives an illuminating introduction, driving home the point that these stories aren’t necessarily the type that will be immediately enjoyable. As he says, “… their style and subject matter challenge, but to embrace them is to win something worth having for the rest of our lives”. Following the introduction, Dennis Widmyer and Richard Thomas give a brief overview of the origin of the book, then we get into the transgression.

Given all the words of warning, some of the stories seem tame at first. These ones go over easy, but that’s not to say they’re without merit. Everything in the collection provides food for thought at the very least. Don’t worry. Soon enough you’ll be wondering just what the hell you’re getting yourself into. Among other things, you’ll read about the detailed bodily reaction to a tapeworm diet, a war vet who probably shouldn’t be left alone with a kid, a pharmacist with a thing for death, a suicide club, an insert-various items-from-the-supermarket-into-your-genitals-club, a school shooting, sex with zombies, more than a few sociopaths, more suicide, and the ins and outs of bestiality.

All of this would have been easy enough to churn out for a cheap thrill, to sensationalize or exploit. This isn’t what Burnt Tongues is all about. Most of the writers here seem to be testing just how far the envelope can be pushed while still respecting the depth and nuance of human behavior, however aberrant or psychotic that behavior may be. There’s a human core somewhere in the madness, and while readers (hopefully) won’t identify with or relate to everything represented here, there’s always something to keep you flipping the pages without turning away in disgust. The off-the-wall subject matter is balanced well with pathos and compassion, and the end result is a powerful bunch of stories that you won’t soon forget.