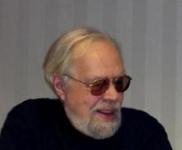 The Horror Writers Association (HWA) has announced Bruce Boston as Poet Guest of Honor for the Bram Stoker Awards™ Weekend 2013, to be held in New Orleans from June 13-16, 2013.

Bruce Boston is the author of fifty books and chapbooks, including the novels The Guardener’s Tale and Stained Glass Rain. His poetry and fiction have appeared in hundreds of publications, including Asimov’s SF Magazine, Amazing Stories, Weird Tales, Strange Horizons, Year’s Best Fantasy and Horror, and The Nebula Awards Showcase. One of the leading genre poets for more than a quarter century, Bruce has won a record four Bram Stoker Awards for Poetry, a record six Asimov’s Readers Awards for Poetry, and a record seven Rhysling Awards from the Science Fiction Poetry Association (SFPA). He received the first Grandmaster Award of the SFPA in 1999. His fiction has received a Pushcart Prize and been a finalist for the Bram Stoker Award for Superior Achievement in a Novel and the Micro Award for flash fiction. Bruce lives in Ocala, Florida, once known as the City of Trees, with his wife, writer-artist Marge Simon, and the ghosts of two cats.

HWA President Rocky Wood said, “Bruce is one of the most respected genre poets of recent decades. His work is original, compelling and challenging. We are pleased he has agreed to share his knowledge and experience as a poet with the Convention and I know attendees will be looking forward to his Guest of Honor panel and his readings. It will be interesting to hear him expound on how he composes across genres and also writes prose, including award nominated novels. As well as being highly awarded Bruce is well known for giving back to the genre through his active participation in the Horror Writers Association and tirelessly working to promote the poetic form.”

“We are proud to have a Poet Guest of Honor, which recognizes the importance poetry has always played in the horror genre and undoubtedly always will,” Wood added.

The Bram Stoker Awards Weekend incorporating the World Horror Convention 2013 will be held at the Hotel Monteleone in New Orleans, Louisiana. The Horror Writers Association, the peak group for horror writers, is also hosting World Horror Convention as part of our regular Weekend. The HWA is a worldwide organization promoting dark literature and its creators. Started in 1985, it has over 700 members writing professionally in fiction, nonfiction, videogames, film, poetry, comics, and other media.