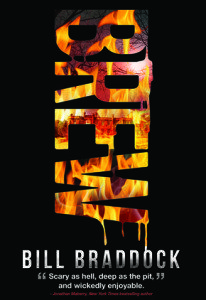 College Heights is a typical American college town, until a popular local microbrew gives its citizens the undesirable side effects of brutally killing, raping and eating each other (sometimes in that order). Brew is over the top in terms of sex and gore, so readers should be sure to have strong stomachs going in. This isn’t just for fans of brutality, though. It’s a clever take on (fast) zombies and an emotionally charged, character-driven survival story.

In the middle of this is a group of diverse and sympathetic characters that are easy to like and to cheer for. The cast is large, but Braddock wisely puts focus on a select few. Since the events of the novel occur over a single night, characterization is generally achieved through flashes of memory, which all ring true and in some way directly affect actions and events throughout the story. These quiet, reflective moments are as well-written as the rest of the novel and are a welcome (if brief) respite from the chaos. They also crank up the tension when the characters are thrown back into the fray. In typical fashion for this kind of story, minor characters come and go as fodder for the crazed hordes, dying in a number of disgusting and creative ways. Main characters aren’t necessarily spared either, so be prepared for some sad and shocking surprises.

The prose is surprisingly poetic at times. Staccato bursts of harsh alliteration drive some of the more visceral scenes, gentle and evocative imagery coloring the pages when things slow down. It’s a pleasure to read in more ways than one.

Although the tone is deadly serious at times, Brew never loses its sense of fun. Braddock in some instances name-drops some of his influences and sources of inspiration. One of the characters is reading a Jack Ketchum novel; another (a gleefully sociopathic chemist) is named Herbert Weston, a not-so-subtle nod to the cult classic Re-Animator. A few street names will be familiar, too. Well-versed horror fans will get a kick out of these references in between getting their teeth kicked in by the hyper-violence.

Braddock has crafted a heady, multilayered brew, not just some cheap swill that will rot your gut. Anyone looking for refreshing survival horror or splatterpunk with brains will gladly knock this one back and be thirsty for more.