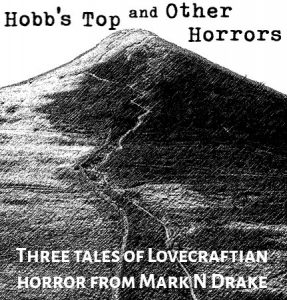 Mark N. Drake has just released a short collection of three stories, all set on the fictional Darkisle, where he has also set his soon-to-be-released novel, A Gathering Storm. Darkisle is a foreboding place that reminded me more than a little of the infamous Summerisle, the setting for The Wicker Man. The stories themselves are a mixture of Lovecraftian horror, including some distinctive Cthulhu Mythos elements, and folk horror, which I think works very well. They are not directly linked, but together paint a clear portrait of the island and its inhabitants, human and otherwise. I’ll provide a brief description of the three stories but will avoid spoiling the stories’ plots.

“Hobb’s Top”: Set in early 1980s, this is a tale told by local farmer to a hiker after the hiker seeks shelter from inclement weather and asks about a shortcut over the nearby hill, the eponymous Hobb’s Top. The old man tells him why that’s a terrible idea, recounting the experience of a previous pair of hikers who learned why the locals all avoid the area. Great atmosphere and sense of place to the story, and a nice bit of body horror as well.

“Tribute”: A novelette (the longest work in the collection) set in 1923 in Seaview, the one coastal resort town on the island. A down-on-his-luck hotelier named Edward has the misfortune to fall in love with a female con artist visiting the island. Things go downhill for Edward, and his sister Alice—a nurse at the local asylum—is left to pick up the pieces. She encounters Martha, an inmate at the asylum who has been committed there for allegedly committing infanticide. Martha offers Alice the possibility of justice/revenge, if only Alice will free her. Probably the story most directly tied to the Mythos.

“Keeper”: The final story, also set in the 1920s. It concerns the farming folk who live on the island. This one is probably more folk horror than anything Lovecraftian or cosmic, but a nice bit of body horror that (perhaps) sheds some light on what happened to the previous hikers in “Hobb’s Top.”

This is a brief, though highly entertaining, collection of stories from a newcomer, which I always welcome. I don’t think you have to be at all steeped in the Cthulhu Mythos—or even like it much—to enjoy these stories. You can read them as being in an explicitly non-Cthulhoid universe and they would work just find. You only have to accept that at least some of the folk tales about things that go bump in the night are true. Certainly worth checking out, and the price (free) can’t be beat.