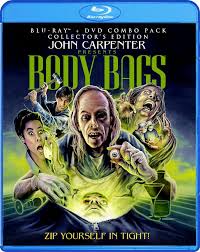 I usually love horror anthology films. To me, they’re like an all you can eat buffet. Even if you don’t like one or two items on the menu, you are almost sure to find something to your taste. And that’s how it is with this rather odd 1993 flick, Body Bags. It was originally conceived as an anthology TV show written by Billy Brown and Dan Angel that was sent to John Carpenter for his opinion. Carpenter liked what he saw and thought it would be fun to do, so he directed two of the segments, got fellow horror master Tobe Hooper to direct one, and even played the Crypt Keeper-like horror host in the wraparound segment. The end result didn’t become a TV show, but it did become an original film made for the American cable TV channel, Showtime. Now it’s not a perfect film. In fact, it’s kind of silly, but it sure is a whole lot of fun. It is also a who’s who of the horror community with more cameos by big names than you can shake a severed head at. So it’s not a great flick, but it is enjoyable.  So does that mean this new Blu-ray is worth a buy? Well grab your doctor scrubs and your favorite bone saw, we’ve got a number of body bags just waiting to spill their contents for our sick amusement. So let’s get to it.

As previously stated, John Carpenter acts as the emcee who introduces each segment. To add the prerequisite gallows humor to the horror, he plays a very creepy oddball mortician that tells you, the audience, how each and every body bag (title plug) came to be in his not so tender care. So that’s the setup and this anthology has three somewhat lengthy shorts.

The first is called “Gas Station” and it’s about a young woman working alone in an isolated gas station and all the weird and creepy customers she has to deal with on a night where a murder has just happened in Haddonfield. Yes, presumably that Haddonfield. Horror fans should keep your eyes peeled for director Wes Craven playing one of the creeps, Robert Carradine as a gas station attendant, director Sam Raimi in a short but memorable role, David (American Werewolf in London) Naughton as a seemingly earnest customer, not to mention Carpenter regulars Peter Jason, Buck Flower, and tons more. Besides being a name-that-guy-athon, this short is a pretty solid bit of suspense, as the whole time you know something is just wrong with what you’re seeing, and you’re waiting for the other shoe to drop to find out what it is.

The next tale is called “Hair” in which Stacy Keach plays a balding guy desperate to hang on to his thinning tresses. He goes to a strange doctor, played to weird perfection by David Warner, for a solution to his fleeing follicles. And as if you haven’t guessed by now, this story is a weird one. It’s full of black comedy and dips a bit into sci-fi territory. It also has cameos aplenty by Sheena Easton, special makeup effects master Greg Nicotero, and Deborah Harry. If you like a healthy dose of humor with your horror, you’ll appreciate this segment more than if you were only looking for serious frights.

The last story is a bit more solemn, but not any less strange. Called “Eye”, it stars Mark Hamill as baseball player on the verge of making the big leagues who loses an eye in a car accident. Desperate to get another peeper, as he can’t play pro ball with just one eye, he volunteers for a radical new eye transplant operation. Unfortunately, things don’t go as planned, as you would expect in a horror anthology. Also unfortunate is that the idea behind this short has been done by many other movies before and since, such as the Hong Kong (not to mention US remake) fright flick, The Eye and the often overlooked Body Parts from 1991. There are even similarities to some extent with the 1978 thriller, Eyes of Laura Mars, which (surprise, surprise) was partially written by John Carpenter. Still, this isn’t a bad story, it just suffers a bit from been there, seen that syndrome. It also has a number of cameos for you to keep your eyes (heh) peeled for. Twiggy, John Agar, Charles Napier, and King of the B-movies Roger Corman all pop up here.

Included in this new Blu-ray/DVD combo pack from Scream Factory are a couple of extras. First and foremost is an entertaining commentary track with director (and here, actor) John Carpenter, producer Sandy King, and actors Robert Carradine and Stacy Keach. There is a collection of interviews from many of the cast and crew in a featurette called “Unzipping Body Bags” that runs a respectable 20 minutes. There is also a trailer.

Body Bags is a solidly enjoyable bit of horror fun, but it’s not great. It’s just lacking that certain something to push it over the top into the realm of the truly amazing horror anthologies. But for you diehard horrorheads out there, or you lovers and collectors of all things John Carpenter, I can easily recommend it. As I am both of those, I am very happy with this release. If you would like to get you own copy of Body Bags you can do so on November 12th.