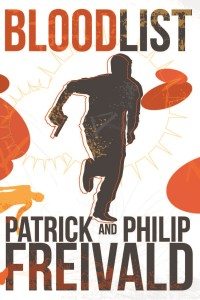 By Patrick and Philip Freivald

The D Street Killer has been on a relentless path of death and destruction managing to elude the FBI with each fallen victim. Just when Special Agent Gene Palomini is on the verge of apprehending their ruthless sociopath he escapes, sending the bureau into a frenzy of frustration. At last the contract killer introduces himself as one Paul Renner and makes a bargain with Palomini. For amnesty against any charges he’ll not only assist but lead the long arm to the law directly to the one responsible for putting the contracts out on each of his victims. In a race against the clock Renner and Palomini unite to find the one responsible for all the mayhem and bloodshed. Will Palomini live to regret trusting the D Street Killer or will Renner prove to have an entirely different motive?

The folks at JournalStone never cease to amaze with their constant reprisal of formidable talent within their arsenal. Bloodlist is no exception in this pulse pounding thrill ride that refuses to relent until the very final pages.

Perhaps what is most intriguing about this espionage like tale is the fact that the plot structure challenges the very principle of protagonist/antagonist protocol. We’re unsure of who to root for as the psychological layers surrounding the cold blooded killer Renner and the FBI are peeled back one by one. With the D Street Killer as the anti-hero and the interpersonal strife that conjures between the agents, a very subtle shift in traditional story telling elements takes place. The brother team of Patrick and Philip Freivald execute this flawlessly, forever luring the reader deeper into the psyche of the story.

It’s evident there must have been some extensive research or previous knowledge from the Freivald tandem on central intelligence infrastructure, FBI proceedings and procedures, and the inner day to day life of a contract killer. They say one of the cardinal rules to writing effective fiction is to write about what you know. If these co-authors know little about the aforementioned variables, they certainly do a tremendous job in delivering a most compelling, believable tale. From the reader’s perspective, we instantly buy into the story as its authenticity forever suspends the ‘what if’ factor.

Drafted much like a chronicle outlining dates, times and locations, Bloodlist hones in on the FBI’s manhunt for the D Street Killer. The action is exhilarating, the sort of thing one may expect in a summer box office smash. The fight sequences are inspiring, the chases invigorating, and the race to uncover who’s behind the contract killings is stone cold intensity, the stuff that even Tom Clancy would be proud of.

The co-authors’ cohesion are unparalleled in prose. It’s next to impossible to dissect or distinguish where each voice begins and ends.  Having read two previous novels from Patrick, I can honestly state there is little variance in how the story telling process unfolds this time around. If anything, his ability to create very realistic characters, exhibit effective action and dialogue, and minimize needless exposition has elevated to the next level. It’s encouraging to see this talented author mold his craft and get better with each release.

The protagonists have admirable traits from Gene’s determination to Sam’s tireless code of ethics to even Paul’s sense of humour and irony. We see a little of ourselves within the characters, or perhaps reflect and escape within our own imaginations and fantasize a little about what it’d be like to be one of these individuals. Who could ask for anything more effective than the ability to engage a reading audience into expanding their imagination?

The Freivald brigade holds no qualms about unleashing the unexpected in terms of what fate may be lurking around the corner for certain characters. You won’t get your typical “Hollywood ending” out of this story. A bold endeavor, I commend the resistance to appease a specific formula and demographic. Let’s face it, in life our greatest allies, confidantes and friends will eventually die, some more tragically than others. Sometimes in life there are no happy endings and I love the fact we aren’t engaged within a predictable plot or conclusion surrounding Bloodlist.

Disclaimer: JournalStone Publishing is the parent company for Hellnotes.com