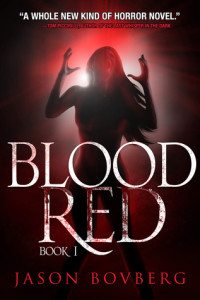 Much has been done with zombies over the past decade or so. Their resurgence and subsequent explosion in popularity has left fans satiated, to say the least. So many zombie stories are out there, across so many types of mediums, that it can be difficult to find a gem that takes conventions and drags them outside the box. Jason Bovberg’s Blood Red is one such gem.

Blood Red, the first volume of a projected trilogy, follows 19-year-old Rachel through a world that’s been suddenly thrown into disarray. She awakens to find that nearly everyone in her town seems to be dead, a strange and harmful red glow emanating from their heads. After this debilitating discovery, she sets out to find her missing father and to piece together what’s truly going on.

Rachel makes a strong protagonist. Confused and helpless at first, she changes considerably through the course of the story, finding the inner strength to take charge and do what needs to be done. Her quest to find her father is a touching and harrowing one, and readers will be drawn in by this alone. The other characters, though not as well-drawn, are likable as well, bringing their own unique strengths and abilities to the grim proceedings.

The zombies (if they can be called that), are downplayed for much of the novel, which works to its benefit. The first two acts set up the characters and build suspense. Speculation as to the cause of the mass death is tossed around, but in this case, the unknown is far more unnerving than anything else. Descriptions of a strange scent and red-tinted quality to the air, as well as explosions and fires in the distance, give a sense of unease. One claustrophobic chapter is set in total darkness, accompanied by bone-chilling sounds you wouldn’t want to hear even in daylight. While the characters try their best to create order and take care of the injured, the ones already deceased are twitching, slowly changing into something altogether unnatural…

There’s a lot of heart in Blood Red, and the strong attention paid to the emotional side of things is in striking contrast to the horrific imagery of what happens in the climax. The requisite gore is vivid, depicted with a gleeful and unflinching eye for detail. Given that the zombies aren’t in full swing until the last third of the novel, not a lot can be said about them without divulging too much. Suffice it to say, anatomically speaking, these are some of the most twisted and disturbing creatures you’re ever likely to read about. Yes, the bulk of the story is a quiet and character-driven study of the initial reaction to the incident. When the action ramps up, though, the novel absolutely earns its title. Think Silent Hill and you’ll be on the right track.

Far from being a cookie-cutter zombie novel, Blood Red is worth reading even for those who aren’t fond of the shambling, flesh-eating variety of horror. It’s by turns emotionally gripping, disquieting, and outright terrifying. Here’s hoping we won’t have to wait long for the sequel.