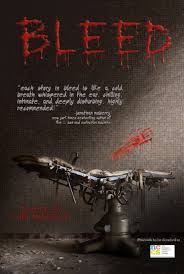 Bleed is a collection of 47 short works by known and lesser known authors in the horror genre. Most of the works are short fiction but there are about a half dozen essays and a few poems. The theme anthology focuses on the horror and devastation of cancer. This may sound depressing but Editor Lori Michelle does an amazing job of balancing the book with very different tales of horror, grief, emotional loss and even hope. Sometimes the tales are directly related to the illness. Sometimes the authors use fictional plagues or monsters to make the case. And in other stories, it is an allegory that may not connect right away but later as the story absorbs into your brain.

The first four works pretty much set the pace and shows Michelle’s deft handling of the topic. The introductory essay “True Horror” by Lori Michelle describes her experiences dealing with her son’s diagnosis and treatment of Acute Lymphoblastic Leukemia. It is followed by “With Paper Armour and Wooden Sword” by Tracie McBride, a piece of fantasy fiction that deals with the relentless devastation the disease brings to families and society. But once you finish it and are reeling from the power of the work, you get Bentley Little’s “The Addition” a very subtle and gentle horror tale that at first seems to have no connection until later when the message hits you. Then the pace is changed again with “Welcome to the World, Mister Smiles” by T. Fox Dunham, a horror tale that directly involves cancer and its treatment but with a terrifying twist.

From then on, the stories continue with much more variety then you would suspect for what appears to be a narrow theme. Yet the contributing writers display an abundant of imagination and a refined skill for portraying feelings of grief, loss powerlessness and, most importantly, hope.  No story or essay is weak and if there are better pieces than others it comes from a comparison of strength rather than weaknesses.

There are a number of fictional works deserving special mention. “Sludge” by Stan Swanson is one of the more humorous of the stories and perhaps also a clever tribute to the film The Blob. It works best as a clever analogy.  William F. Nolan’s “Descent” starts out quietly but quickly turns into a harrowing look at facing inevitable death. “Dreams of Shadows” by Robert S. Wilson is one of many stories in the collection that directly takes on the plight of childhood cancer yet it stands out as the most hopeful of the short fiction pieces. Rick Hautala’s “The Call” is a terribly beautiful tale of a son and father. It is one of my favorites and it bear extra significance considering the author’s demise in 2013. Some of the stories features cancer in the form of a sentient monster and “The Sallow Man” by Adam Millard especially stands out in that category. Finally, “No Limit” by Peter Giglio and S. S. Michael has a quirky kind of weirdness to it and if its connection to the anthology’s theme eludes me, it is still too good not to mention.

So overall, Bleed is an exceptional anthology with an unusual theme and fiction that rises over the average in terms of quality and substance. I highly recommend this book as one of the best anthologies you will find. And don’t forget that you will be donating to a good cause. It’s a win/win.